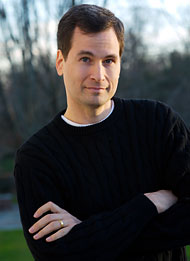 According to his NY Times bio, David Pogue, shown above, "is the personal-technology columnist for The New York Times ... he writes Pogue's Posts, one of The Times's most popular blogs."

David Pogue, who is described on the New York Times website as “the personal-technology columnist,” is claiming he’s not a journalist.

Pogue’s protestations come in the wake of recent criticisms about his interview with Apple CEO Steve Jobs and concerns about the columnist’s varied interests — specifically, the conflict of interest that arises because of Pogue’s personal line of software manuals, some of which provide guidance for the same software Pogue reviews for the Times. The anonymous writers of the blog NYTPicker have put together a thorough post detailing Pogue’s response and the criticisms that led him to speak out.

A few weeks ago, the Times public editor Clark Hoyt wrote about Pogue’s situation. Hoyt’s article riled the columnist into a response. In a TWiT (This Week in Technology) podcast, Pogue contends that he has been aware of the conflict of interest and has tried to convince the editors of the Times to provide full disclosure in his column. The editors, apparently, denied his requests.

More noteworthy and appalling was Pogue’s rebuttal of accusations that a recent interview he conducted with Apple CEO Steve Jobs was a softie. In the TWiT podcast Pogue excuses his lax questioning by arguing, “Since when have I ever billed myself as a journalist?….I am not a reporter. I’ve never been to journalism school. I don’t know what it means to bury the lede. Okay I do know what it means. I am not a reporter. I’ve been an opinion columnist my entire career…..I try to entertain and inform.”  Apparently, opinion columnists don’t have to press interview subjects to answer tough questions. Read the entire NYTPicker post here.