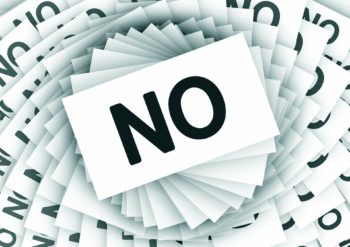 The Daily Mail should be ashamed of itself after comparing a woman to a zombie from the AMC television series, The Walking Dead. The woman, who appeared to have just one eye, was likened to a zombie by the Mail, making a mockery of journalism ethics and fairness and marking a new low for the Mail. The photo of the woman, and hook for the Mail‘s story, was a mugshot taken after she was arrested and charged with prostitution. But her arrest only served as a window for the Mail to exploit and mock her appearance.

The cruel Dec. 8 story, written by Emily Crane, was headlined. “Would you have sex with a zombie? One-eyed hooker who looks like an extra from the Walking Dead is arrested in grisly prostitution bust.”

iMediaEthics will not name the woman in question because we believe it is unfair to further link her to the insensitive Mail story, and the comparison suggested by it, as she already has been throughout the web. Thus, we will redact her name below. While the headline called it a “grisly prostitution bust,” there is no such grisly nature described in the article. Unless one assigns the word “grisly” to the manner by which the Mail approached the news story.

The article is “an obvious outrage” and the zombie comparisons were “reprehensible,” Tim McGuire, the Frank Russell Chair for the Business of Journalism at Arizona State University and a board member of the National Center on Disability and Journalism, told iMediaEthics by phone.

“It shows they have no empathy for people with disabilities,” he said. Given that there were many others arrested with the woman, McGuire pointed out it was obvious the Mail only intended to mock the woman and make her “other.”

“They did it because they thought they had a funny gag,” he commented. “There is absolutely no saving grace in that action at all.” 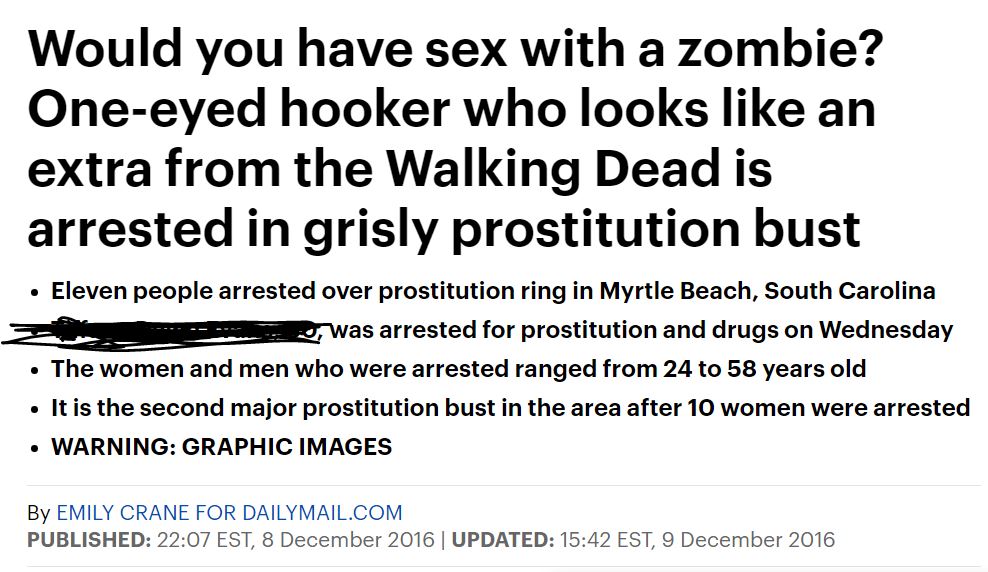 The appalling article began, “A one-eyed sex worker who bears a striking resemblance to a character from The Walking Dead has been arrested.”

The article reported on the woman and other people who were arrested for prostitution or drugs in Myrtle Beach, South Carolina. It goes on to say, “And based off her mugshot, the 30-year-old would not look out of place as an extra one state over in Georgia – where The Walking Dead is set and filmed.”

The article contained two sets of side-by-side images of the woman’s mugshot with a screen still from The Walking Dead. The article also showed mugshots of others arrested with the woman and an embedded video with a Walking Dead excerpt.

Prof. McGuire suggested the Mail should conduct training sessions to learn how to better report and also to just have empathy. He also pointed to the NCDJ’s Disability Language Style Guide, published here, which he called an outstanding resource.

Further, McGuire suggested that the Mail thought that mocking the woman was fair game since she was arrested for prostitution.

“Because she is a sex worker, they felt free, I think, to dehumanize her, and that’s not right either,” McGuire said. “That’s where you get into the ethics that everybody has a self-worth that publications and journalists ought to respect and they clearly didn’t. But again, after 45 years in the newspaper business, you can kind of see something like this and know this is who they are. This is the kind of stuff they do.”

“Ethically, it’s outrageous, it’s exploiting, it’s taking a characteristic that they find negative and making fun of it,” he commented. “Certainly from a disability perspective, it’s exploitative.”

“It’s an ethical case, you don’t do harm, you respect people and you seek truth — those are ethical principles,” he said. “Then you get to disability principles. You don’t exploit, you don’t mock, you don’t demonize.”

The Society of Professional Journalists’ ethics chair Andrew Seaman told iMediaEthics that the zombie story wasn’t “surprising” from the Mail.

“For years the Daily Mail has popped into my Facebook or Twitter feeds,” he e-mailed iMediaEthics. “Of all those stories, I rarely ever found one to be responsible or of value. Most of the time the stories are harmful and simply pander to lurid curiosity. So, this story is not surprising.”

Warren Gall, the Chief of Police for Myrtle Beach, declined to comment to iMediaEthics. We’ve reached out to AMC, which broadcasts The Walking Dead, for comment.

The author of the article, Crane, works for the Daily Mail in Australia, halfway around the world from Myrtle Beach, S.C. The Australian Press Council told iMediaEthics it hasn’t received any complaints on the story yet, but the UK press regulator the Independent Press Standards Organisation said it has received one complaint over discrimination so far.

iMediaEthics has contacted the Mail‘s spokesperson for comment but hasn’t received any response.

This isn’t even the only severely problematic story out of the Mail this month. Just yesterday the Daily Mail Australia apologized for an invasive, hurtful article about TV host Samantha Armytage’s underwear, which was based on paparrazzi photos of her. The Mail apologized after Armytage sent a legal threat. Read about that case here.