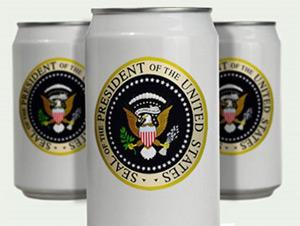 Instead of promoting a serious discussion, news networks, such as CBS, are promoting beer. The above image was the illustration used for CBS News' coverage of President Obama's forthcoming meeting with Harvard professor, Henry Louis Gates and Cambridge police Sgt. James Crowley regarding the serious topic of race relations and the recent troubling incident of Gates' arrest by Crowley in Cambridge, Mass. (CBS/AP)

With the help of the media, the “teaching moment” among President Obama, Harvard professor Henry Louis Gates and Cambridge police Sgt. James Crowley has quickly devolved into a beer commercial. CBS News’ headline– “Bud Or Blue Moon? Obama’s Beer Diplomacy On Tap“–sets the stage. Sadly, today’s meeting among the three men is described not as a much needed and serious discussion about race, but more as a fun-filled product placement opportunity for the beer industry.

CBS writes: “The White House has suggested that the president will drink Budweiser, the same beer he had at the Major League Baseball All-Star Game. (That game, it’s worth noting, was held at Busch Stadium in St. Louis, so Mr. Obama couldn’t very well opt for a Miller Genuine Draft.) Crowley is said to be a fan of Blue Moon, the Belgian Wheat Ale often served with an orange slice.”

After The Boston Globe reported that Gates is “partial to Red Stripe and Beck’s,” Harry Smith, CBS News Early Show co-anchor, is quoted by CBS as offering his opinion on these particular beer brands, instead of commenting on the importance of improving race relations: ” ‘ Beck’s as a straight ahead pilsner, ‘foreign without being froo froo,’ while Red Stripe, from Jamaica, is more akin to a ‘vacation in a can.’ ”

Newser lists ABC News and CNN as adding to the media’s frivolity and trivialization of what could have been a sober (pun intended) and serious discussion. ABC News, for example, describes Gates and Crowley’s White House visit as combining “a frosty brew and some racial reconciliation.” Who knew racial conflict could be such fun?!

But never mind. I will stop here so I can particpate in the CBS News poll at the end of their report : “What brand of beer should President Obama serve at the White House with Harvard Professor Henry Louis Gates, Jr. and Cambridge police Sgt. James Crowley on Thursday?” Here are my choices: “Budweiser,  Blue Moon,  Red Stripe,  Beck’s,  Sam Adams,  All of the Above, Something Else.”

Unfortunately, what I want for today’s meeting among these three men is not offered on the menu.