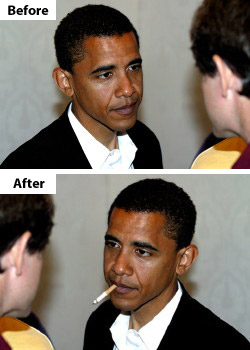 A Hoaxer took an existing photo of Obama, see top image, and added a cigarette. The Photoshopped image, on botom, circulated the Internet during the 2008 campaign.

Barack Obama  a former smoker, admitted to sometimes lighting up a cig or two during the stressful campaign. However, the campaign managed to control any photographic evidence of his slips into an old bad habit.

The Musuem of Hoaxes reported: “In early 2008 the top photo began circulating online, showing Obama with a cigarette in his mouth. It is not real. The original photo (top) was taken by Kwame Ross on Aug. 3, 2004 while then-State Sen. Obama met with constituents at the University of Illinois while campaigning to become a U.S. Senator.”  (Hat tip: My Green Meadows blog).