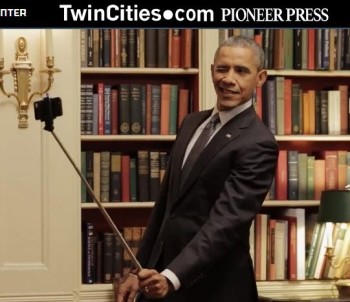 The Pioneer Press originally captioned this photo to say that selfies are "a fool-proof way to make yourself look like a self-absorbed assclown." (Credit: Pioneer Press/BuzzFeed)

President Barack Obama has had a rough few days.

First, a North Carolina newspaper called him the Antichrist in a headline for a letter to the editor. (The newspaper corrected because the letter writer really thinks Obama is the seventh king who comes before the Antichrist).

And now, a Minnesota newspaper called him an “assclown,” the Washington Post reports.

Minnesota’s St. Paul Pioneer Press made the disparaging remark in a photo slideshow caption that featured a picture of Obama from a series of images of the president making faces while using a selfie stick to promote sign-up for Obamacare insurance.

The sports producer who made the slideshow, Kevin Cusick, told iMediaEthics by email he realized the caption was a problem when the local news station contacted him.

“After getting the query from KMSP, I realized the use of assclown (one of my favorite words) was a bit much here, and it came off as too-directly referring to the president (as opposed to selfie-takers in general),” he told iMediaEthics. “So I substituted the word celebrity instead.”

“Don’t get me wrong. It WAS meant as a little dig at the president. But it came off as more of a sledgehammer,” he wrote, adding that the paper has received “some” complaints. “Usually, when mocking politicians, I try to be an equal opportunity offender. Sometimes I hit that goal. Other times …”

He also admitted to KSMP that “assclown” was “a poor choice of words.”

Mike Burbach, the Pioneer Press‘s editor, told iMediaEthics by e-mail that the newspaper received “more than a few, less than a ton” complaints over the “assclown” comment, which was posted online for a short period of time.

He added, “That caption was part of a regular, snarky slideshow that makes fun of celebrities and news events. In terms of general web snark, it’s probably mild, but the original caption on that picture, for us anyway, reached too far for a joke. When I learned of it first thing yesterday morning, I had the guy who does the slideshow edit it.”
Obama’s selfie series was shown in a video published by BuzzFeed last week, see below.

The original caption read in part that selfies are “a fool-proof way to make yourself look like a self-absorbed assclown,” Minneapolis-St. Paul Fox affiliate KMSP-TV reported.

The now-corrected caption reads: “”SELFIES: A fool-proof way to make yourself look like a self-absorbed celebrity.” See below a screenshot.