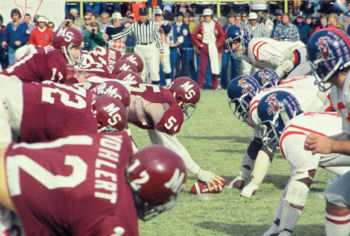 Sports news site SB Nation reported that Univ. of Oregon Ducks football coach Willie Taggart turned down a job offer at Ole Miss. The Ole Miss Rebels are looking for a new coach, according to SB Nation, but in reality, Taggart hadn’t declined the gig.

SB Nation added an editor’s note to its article explaining the claim was just a rumor that was “accidentally published.” That editor’s note reads:

“[Editor’s note: An accidentally published version of this story described Taggart as having received and turned down an Ole Miss offer. It’s been corrected. We often keep a running log of rumors and information to look into, and we unintentionally included such information in this post. My fault. — Jason Kirk]”

On Twitter, Kirk, SB Nation’s college football editor, also took the blame for the error, writing, “Hello I”m the moron who pressed publish too early.”  SB Nation’s Steven Godfrey added in a tweet that the claim about Taggart “wasn’t correct information for publish” and was the result of a “production error.” iMediaEthics has written to Kirk to ask how long the error was published.

The day before SB Nation’s error, Taggart responded to rumors that he might want to leave Oregon for another team, the Oregonian reported. His response to ESPN was “Do I look unhappy? I’m not addressing any more rumors…You might have to ask that guy, whoever put that rumor out. Do I look unhappy? Do I ever look unhappy? … Winning is living, baby. I’m happy.”

iMediaEthics has written to both the Oregon Ducks and Ole Miss to ask for a response to the error and rumors. Ole Miss’s associate athletics director for communications Kyle Campbell told iMediaEthics, “We do not address rumors or speculation about our head coach position. Thanks.”

Awful Announcing praised SB Nation for its transparency in addressing the error, writing, “SB Nation deserves credit for the level of transparency here, including the explanations of what specifically went wrong. And it makes sense that they track rumors internally, then get them confirmed or denied before actually publishing. But this does illustrate the need to be careful with a process like that.”

Not the case. That wasn’t correct information for publish and was edited. Production error https://t.co/eCI1qkIYma

Hello I'm the moron who pressed publish too early https://t.co/7jJ1DnafCu