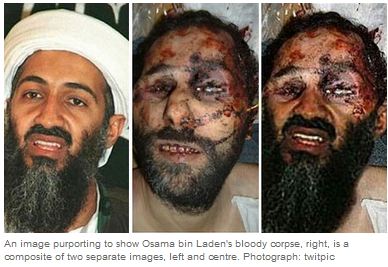 PHOTO A + B = C? Real photo of Osama bin Laden, on left. In the middle, an unidentified person. On the right, a photo seems to combines the previous two photos to fake an image of bin Laden's corpse. (Credit: comparison by The Guardian, screenshot detail)

Among those who fell for the doctored image, the Mail, the Sun, the Mirror, and the Telegraph, who have all since taken the photo off their websites. Tabloid Watch noted that Sky News also reportedly fell for the fake photo and Digital Spy added that the photo also “was shown on Pakistani TV.”

The fake photo was Photoshopped and using a photograph reportedly from “at least 2009.”  See here a cache of an April 29, 2009 post on ThePeoplesVoice.org featuring the faked photo.

The Guardian added that the medialine.org also posted the fake photo on that 2009 date along with an editor’s note that the site wasn’t sure if the photo was legitimate.

“The bloodied image of a man with matted hair and a blank, half-opened eye has been circulating on the internet for the past two years,” reported the Guardian.

The Telegraph noted that the Photoshop was done by taking the bottom, mirrored half of a 1998 picture of Bin Laden and putting on the top half of another photo.  The “gory” (graphic image) side by side comparison is here.

“Why rush to publish without checking it out properly first? Doesn’t this event contain enough that is newsworthy already?” Tabloid Watch wondered.

The Los Angeles Times reported that “Pentagon officials” say “photos of Bin Laden’s dead face do exist but those widely distributed on the Internet are fake.”  According to the Times, a photo may be released.

ABC News reported that while releasing the photos will prove that the U.S. did kill bin Laden, the pictures are “gruesome.”

“He has a massive head wound above his left eye where he took bullet, with brains and blood visible,” according to ABC News. StinkyJournalism is writing to ABC News to ask how they know that.

The Los Angeles Times suggested that there may be video footage of actual moment of bin Laden’s killing.   “Such special ops are typically videotaped by mini-helmet cams to document a sensitive mission and assist in debriefing and future training,” according to the Los Angeles Times.

Digital Spy added that the U.S. has released documentation of other “high-profile killings” like Saddam Hussein’s corpse post hanging.