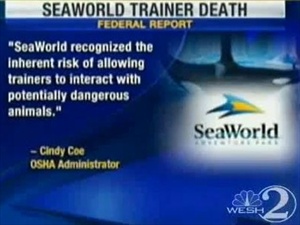 Dawn Brancheau died in February after killer whale Tilikum (also known as Tili) pulled her under water by her ponytail.  Brancheau was a seasoned trainer at SeaWorld.  Brancheau’s death is the third death to which Tilikum is linked.

The latest twist in the story is the Occupational Safety and Health Administration’s (OSHA) recent fining of SeaWorld.  OSHA fined SeaWorld $75,000 for three safety violations Aug 23, CNN reported.  The OSHA study of SeaWorld’s practices came as a result of Brancheau’s death.

iMediaEthics has followed the case because SeaWorld has fought against the public release of video footage of Brancheau’s death.

iMediaEthics wrote in a commentary wondering if SeaWorld had a conflict of interest in fighting to keep the videos from being seen by the public.  We later posted a question and answer e-mail correspondence with SeaWorld’s communications vice president, Fred Jacobs.  Jacobs told StinkyJournalism SeaWorld was against releasing the footage because of the Brancheau family’s right to privacy.

The SeaWorld incident was a media ethics issue because the video documentation was turned over to the police for investigation.  Therefore, after the investigation was completed, the footage should have become public record and available to the media.  But, Brancheau’s family fought for the footage to be sealed.

Media outlets, including The Orlando Sentinel, attempted to negotiate with the family, offering to not publish the video or images from the footage if reporters could look at the materials.  But, in mid-July, the Orlando Sentinel announced that it and other media outlets stopped pursuing the video and photo footage of Brancheau’s death.

According to the Sentinel, its parent company’s (the Tribune Company) assistant general counsel David Bralow said the media outlets decided to “withdraw from the case after the sheriff’s office released a detailed written report describing the contents of the video.”

iMediaEthics has written several times about the SeaWorld case also including when PETA called for manslaughter charges against SeaWorld in Brancheau’s death.  PETA is still calling for SeaWorld to release Tilikum, NPR reported.

SeaWorld has maintained that its safety procedures are up to snuff, most recently publishing a statement on its website by Jacobs.  The statement counters OSHA’s review:

SeaWorld disagrees with the unfounded allegations made by OSHA today and have already informed the agency that we will contest this citation. The safety of our guests and employees and the welfare of our animals are core values for SeaWorld and areas in which we do no t compromise…

OSHA’s allegations in this citation are unsupported by any evidence or precedent and reflect a fundamental lack of understanding of the safety requirements associated with marine mammal care.

Simons, who started at SeaWorld about a week before Brancheau’s death and was fired during the OSHA investigation period, laid responsibility on SeaWorld.

SeaWorld claims Simons was fired for “poor performance during the OSHA inspection,” “Good Morning America” reported.  “During those critical weeks, Ms. Simons repeatedly demonstrated an inability to conduct herself to the acceptable standard of competence, transparency, integrity or professionalism demanded of an inspection of this magnitude.”

OSHA’s regional administrator Cindy Coe said in an Aug 23 statement that while SeaWorld was aware of the risks involved with letting trainers work with dangerous animals, it still “required its employees” to do so, CNN reported.

One of the three citations was deemed willful – “committed with plain indifference or intentional disregard.”  That citation was for “exposing” SeaWorld employees to the dangers of working with killer whales.  The other two citations were facility-related: for no stairway railing on the side of a stage and for no weatherproof covers on outdoor electronics.

iMediaEthics is reaching out to SeaWorld by email and will provide any updates.

UPDATE: 08/30/2010 2:05 PM EST:  SeaWorld’s communications vice president Fred Jacobs wrote in response to an e-mail from iMediaEthics that SeaWorld’s internal review is still ongoing and that SeaWorld has no additional comment beyond its statement on its website. Also, “as you probably know, we are contesting the citations.”