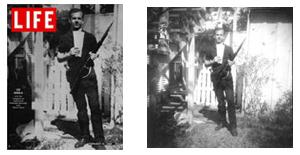 In February, 1964, Life Magazine and the Detroit Free Press were rushing to publish stories on Oswald's role in the assassination of Pres. John F. Kennedy. The soon controversial "back yard photo" appeared on the cover of Life Magazine and the front page of the Free Press. The problem was certain alterations to the photograph in the Free Press--but not in Life (such as the removal of the rifle's scope)--quickly fueled distrust and talk of conspiracy.

The now infamous “Oswald backyard photo” that appeared both in Life magazine’s cover and in the Detroit Free Press in February 1964, serves as a good example of how sloppy photo doctoring in the media can lead to political distrust.

Gene Roberts, then journalist at the Free Press (later for The New Yorker Times), said hurry and competition led to 1964 photo alterations of Lee Harvey Oswald standing in a yard holding a rifle and a communist newspaper for fast reportage on the assassination of Pres John F. Kennedy.

See interview with Roberts at The Education Forum. Roberts apparently told Adam Wilkinson the trouble started when people noted that a rifle’s scope was visible in the Life Magazine cover but was removed from the Detroit Free Press front page image that scooped Life’s publication.

Robert said, “Panic developed at the Free Press, which wanted the photos in time for the first edition of the Monday paper, which had a 6 p.m. deadline on Sunday. We knew that Life magazine had access to some of the photos and would start appearing at newsstands about noon on Monday. We wanted to beat them to the punch.”

He continued, “In the haste to get the photos in the paper, an airbrusher covered the sniper scope (on the rifle Oswald was holding along with The Worker paper) with liquid chalk.”

The Museum of Hoaxes writes: “In 1978 the Select Committee on Assassination of the House of Representatives commissioned a panel of photographic experts to study the photo. Their examination included microscopic analysis of the photo, as well as photogrammetric comparison of Oswald’s face to other photos of him (including two other photos taken in his backyard). No evidence of tampering was found. The mysterious line across Oswald’s chin was determined to be a water spot.”

Dino A. Brugioni’s 1999 book, “Photo Fakery” is the main reference for this, and other older, historic cases of political photo fakes that you read about on the web. He cites a detailed list of all the experts and their methods of analysis applied to three Oswald photos after public charges that they were fakes. Brugioni states that experts were provided the original cameras and negatives which, he points out, real photo fakers would unlikely do as such access gives photo tampering detection analysis greater accuracy.