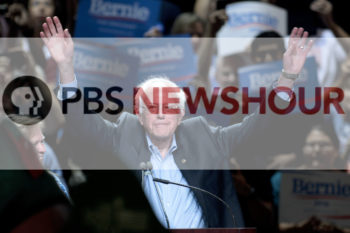 PBS NewsHour stands by its coverage of Bernie Sanders after viewer complaints.

PBS ombudsman Michael Getler wrote May 25 about viewers messages. “Throughout this amazing and truly quite extraordinary campaign season, the majority of the mail coming to me that focuses on political coverage has centered on Vermont Sen. Bernie Sanders and how he and his campaign have been covered by the PBS NewsHour,” Getler reported.

Getler pointed out that he’s commented on reader concerns on Sanders coverage a few times over the past six months but that “the mail continues, and it remains generally critical of the coverage.”

PBS responded to Getler, saying it stands by its coverage and will continue covering Clinton versus Sanders until one is nominated:

“We appreciate viewers’ attention to our ongoing election coverage. The NewsHour is committed to covering this election with the highest standards of accuracy, fairness and balance that the program has maintained for more than 40 years. We recognize there is still a contest underway for the Democratic nomination and we’ve reported on the competition between Hillary Clinton and Bernie Sanders in each of the 44 state primaries and caucuses held so far. We plan to do that until the primaries conclude and on through the Democratic Party convention.”

For his part, Gelter said he thinks NewsHour has “done quite a good and professional job on the campaign, and on Sanders, thus far,” but acknowledged failings like “some stumbles, omissions, body language and questionable tone on occasion.”

Getler defended NewsHour co-anchor Judy Woodruff against criticism for posing “tough questions” related to Sanders, and also noted he thought Sanders has handled her questioning well. For comparison, PBS NewsHour hasn’t interviewed Donald Trump yet but that is because he hasn’t accepted any of the program’s attempts, Getler reported.

In December, Getler flagged that Sanders hadn’t received much TV coverage at the time, but that PBS NewsHour interviewed Sanders three times — more than it interviewed any other candidate.

In April, Getler addressed concerns about Woodruff’s interview of Sanders. “I thought she asked tough questions and she said she was ‘playing devil’s advocate’,” he wrote. “But her tone did get in the way a bit in the last few questions, so I understand some of the complaints I got. But, so what? Better to be challenging than to lob softballs.”

In February, Getler wrote about viewer reaction to the PBS-hosted Democratic debate and in April, he wrote about Charlie Rose’s interview with Sanders.