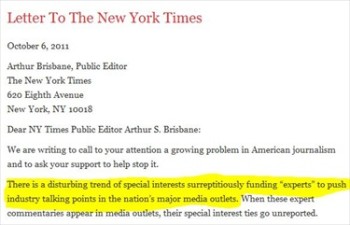 See above, a screenshot detail from the petition to the Times. (Credit: True Ties, screenshot, highlight added)

The Guardian’s Roy Greenslade highlighted a petition for the New York Times to be more transparent about the “experts” it cites. The petition, hosted here on True Ties’ website, reads in part:

The petition references the Times’ publication of “opinion pieces” and “commentaries” by Robert Bryce of the Manhattan Institute, “which has received millions of dollars in funding from the fossil fuel tied organizations including ExxonMobil and Koch Industries.”

The petition argues that identifications of these experts as just being “affiliated” with the organization isn’t clear enough for readers. Instead, the petition calls for the Times — and other news outlets — to provide more information about any possible agendas or conflicts the source or writer may have.

“We are asking the New York Times to lead the industry and set the nation’s standard by disclosing financial conflicts of interest that their op-ed contributors may have at the time their piece is published….We believe that pundits like Mr. Bryce have the right to share their views, but we believe media outlets have the responsibility to inform their readers of opinion writers’ true ties and conflicts of interest.”

So far, the petition has been signed by members of the Society of Professional Journalists, Radio Television Digital News Association, various news outlets, professors and more.

True Ties is backed by the Checks and Balances Project, which identifies itself as “a government and industry watchdog group and is supported by the New Venture Fund, a 501(c)3 public charity that also supports innovative public interest projects in global health and development, conservation, health, education and other critical sectors.”

Specifically, the Checks and Balances Project says its ” focus is on holding government officials, lobbyists, and corporate management accountable for their actions related to energy, government spending, public health, and the environment.”

The New Venture Fund identifies itself as “NVF executes a range of public interest projects, many of which focus on conservation and global health. We have also managed programs focused on voter registration, disaster recovery, education, and music and the arts.”

EditorsWeblog noted that TechCrunch founder Michael Arrington likewise wants more transparency from the Times following its article on his potential conflicts of interest as a tech investor and tech writer.

Arrington “retorted via twitter that The New York Times fails to disclose their partial ownership of the Rod Socks when writing about them – as can bee seen from this interesting exchange between Arrington and NYT Editor Patrick LaForge,”  EditorsWeblog wrote.

We wrote in December 2010, when then-public editor of the Washington Post, Andrew Alexander, called for the newspaper to provide more transparency about Post-published stories written by non-Post staff. For example, Alexander cited the Center for Public Integrity’s story on stimulus money and the environment, which was published in the Post without explaining what the center is and if the Post “endorses the center’s views.”