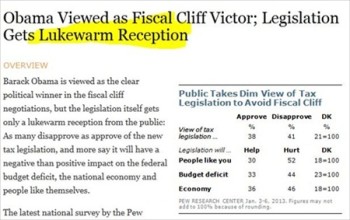 Can there really be a lukewarm reception if not many people have an opinion on something? (Credit: Pew, screenshot, highlight added)

With all the media attention given to the so-called fiscal cliff crisis at the turn of the year, you might think that most people would have strong opinions either for or against the final agreement. But a new Pew poll finds that the vast majority of Americans were largely unengaged on the issue. Only 6% strongly approved and 12% strongly disapproved, while the rest – 82% — didn’t have a strong opinion one way or the other.

That’s not the message coming out of Pew, however, which headlined instead that the agreement received “lukewarm reception.” The report ignored altogether the intensity of opinion that was measured, and instead combined the weak and strong opinions together, to produce the results shown in the next graph. The Gallup and Washington Post/ABC polls didn’t measure intensity at all.

All three polls were conducted over roughly the same time period, though they find quite different pictures of the American public. Approval ranges from 38% to 45%, as does disapproval – with ABC/WP showing net approval by 7 points, and Pew net disapproval by 3 points – a swing of 10 percentage points.

The three polls also asked whether respondents approved or disapproved of Obama’s handling of the negotiations. As happened during the election campaign, Gallup ends up with the most negative assessment on Obama – a net 2-point disapproval. By contrast, Pew shows a net margin of approval of 8 percentage points, and ABC/WP a net approval of 15 points. That represents a net swing of 17 points from the Gallup to the ABC/WP findings.

Once again we have three highly reputable media polls that produce quite conflicting views of the American public on one of the most extensively covered issues in the news media.

One clue to this disparate set of poll results is the large number of Americans who simply aren’t paying attention to this issue. Pew found only 38% of Americans saying they were following the issue “very closely,” but then – as reported above – found only half that number with “strong” opinions. The truth, it seems, is that over the holidays, most Americans were simply tuning out the Washington imbroglio.

So, when pollsters pressure their respondents to come up with opinions that they haven’t yet formulated, respondents are greatly influenced by the way the pollsters frame the issue and the questions. Different frames produce different distortions, none of which accurately reflect the views of a largely unengaged public. The Pew results showing about eight of ten Americans unengaged, however, may be the most realistic picture of public opinion – though not one that pundits and pollsters want to embrace. The illusion of a highly engaged public is clearly more reassuring.