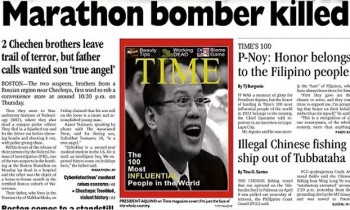 The Philippines Daily Inquirer fessed up to publishing a hoax image on its April 20 front page.

The fake photo showed the country’s president, Benigno Aquino III, on the cover of Time‘s April 20 issue, “The 100 Most Influential People in the World.”

But, Aquino was never on the cover of that issue. As “social news network” Rappler.com explained, Aquino was selected as one of those “100 most influential people,” but “the photo Inquirer used was an Internet meme and was not one of the 7 cover portraits Time released.”

The newspaper’s editor-in-chief apologized for the “honest mistake” in a statement about the error on The Inquirer’s website. Further, The Inquirer has admitted the error in a tweet.

Just last month, iMediaEthics wrote about a similar case in China.  Chinese news outlets published a phony image showing a recently deceased politician, Wu Renbao, on the cover of Time. The original cover showed Jack Abramoff but Wu was Photoshopped in and some of the wording was changed on the cover.  But, the Photoshop was sloppy because the cover still identified Abramoff on the doctored cover.  That didn’t stop outlets including the state-run Xinhua was publishing the photo though.

According to Rappler, since 2012 The Inquirer has found itself in trouble a couple of other times for high-profile front page errors. In May 2012, the newspaper changed a photo caption after criticism over its sensitivity. The caption, which accompanied a photo of Aquino with a Muslim woman in a niqab, asked “Security risk?”  Later, The Inquirer changed its caption to “Palace Guest.”

And in March 2012, the paper apologized for photos published on its front page of Demetrio Vicente, who has had a stroke.  As Rappler explained:

“The photo montage featured 4 pictures of defense witness Demetrio Vicente in unflattering poses with the following caption: ‘Character witness: The many faces of Demetrio Vicente on the witness stand. He’s no ordinary witness after all. He’s the cousin of the Chief Justice whose wife sold him seven parcels of land in 1990, where he now grows bonsai.'”

The Inquirer apologized last year for the above four photos. (Credit: Inquirer via Rappler, screenshot)

iMediaEthics has written to Time and President Aquino’s office for comment. An email has also been sent to The Inquirer asking where it got the photo, how it found out the photo was fake, if a correction was published in the print edition, and what steps will be taken in the future to avoid error. We’ll update with any responses.

Thanks to Leanne for sending us the tip! Don’t forget to send story suggestions to info@asrlab.org