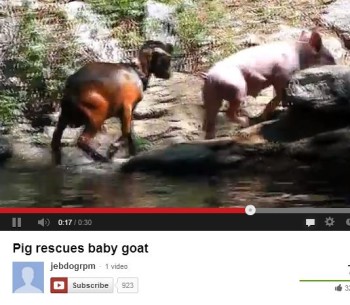 A screenshot from the video. (Credit: YouTube, "jebdogrpm," screenshot)

A slew of media outlets — from NBC’s Nightly News to ABC’s Good Morning America — were hoaxed by a fake video apparently showing a pig swimming to help a goat.

The New York Times, which exposed the video as a hoax , explained “the video was thoroughly staged” for a “new Comedy Central series, ‘Nathan for You,'” whose star Nathan Fielder said the program wasn’t “trying to pull an elaborate hoax on the news.”

Fielder added that he simply posted the video clip on YouTube but others spread the video online.  And Fielder claimed two programs contacted him about the video but apparently not to verify its authenticity. The Times reported:

“In short messages to producers of ‘Good Morning America’ and Anderson Cooper’s daytime talk show, ‘Anderson Live’ — neither of whom asked how the video was made — Mr. Fielder gave them permission to broadcast it but offered no other details about it.”

Fielder said he expected more of the media to “research” before reporting. Some – including Good Morning America’s Elizabeth Vargas and NBC News’ Brian Williams – included skepticism in reports about the video, according to the New York Times. But, he differentiated between news media’s role in spreading the video and his role in posting in, saying:

“I definitely don’t think I have the same ethical responsibility as the news.

“And I definitely don’t see anything wrong, ethically, with posting a video on YouTube that is presented as something it’s not.”

So, now that the video’s been revealed as fake, all these news outlets that reported on the video as if it were real have posted corrections, right?

Round-up of Avoidance: Unpublishing, Row-backs, Updates, but No Corrections

iMediaEthics reviewed a handful of major media outlets’ coverage to see who has told readers about the hoax.

Forms of avoidance include doing nothing to acknowledge bad reporting, unpublishing, updating without admitting error, and rowing back (re-reporting on the story with the correct information but without posting a correction).

The Huffington Post added an “update” disclosing the hoax on its Sept. 20 story, “Pig Saves Baby Goat From Drowning, Dubbed A ‘Hero’ (VIDEO)” The update reads:

“UPDATE February 26, 2013: It has been revealed that the clip, first posted in September 2012, is a hoax. It was staged by the people behind Comedy Central series “Nathan for You.””

NBC News took down its September video and replaced it with a note reading “This Video is No Longer Available.”  On air Feb. 26, NBC News’ Brian Williams told readers about the hoax, saying

“While we said at the time we have no way of knowing if it was real, despite checking, we now know it wasn’t. We can all thank Comedy Central for the hard work of a crew of 20 people, including scuba divers, animal trainers and humane officers. So well done, there.”

“This story sounds like it’s straight out of a kids movie, but it really happened! In this unbelievably adorable video, a baby goat can be seen struggling to stay afloat in the water, crying for help, when a pig comes to his rescue, guiding him out of the water. Don’t believe us? Watch below.”

Time magazine’s Sept. 25 article on the video is still live.

Likewise, the UK Sun hasn’t corrected its September article on the video.

iMediaEthics wrote earlier this month about another animal tale that hoaxed the media where several media outlets reported that armed Ukrainian dolphins were missing.