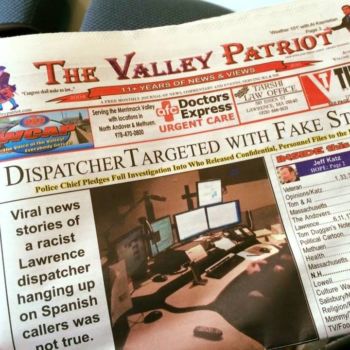 The Valley Patriot, a free monthly Massachusetts newspaper, accused a local mayor, James Jajuga of Methuen, of being a heroin addict, a “crooked cop” and “crooked politician.”

The Valley Patriot‘s March 2018 column, “Paying Attention! With Tom Duggan: Jajuga’s Resume on Public Safety is a Fraud,” was written by the newspaper’s publisher Thomas Duggan.

Jajuga, after claiming that twelve statements in that column were libelous, filed a lawsuit.

In late December, Newburyport Superior Court Judge Elizabeth Fahey ruled that five statements that are “disputed issues of fact regarding their truth or falsity” can be sued over, the Eagle Tribune, a Massachusetts and New Hampshire newspaper, reported.

“The lawsuit has been mired in legal back-and-forth for months, including a counterclaim and motion to dismiss from Duggan, as well as a judgment that allowed Duggan to redact the identities of his sources but compelled him to turn over information from those sources to Jajuga’s legal team,” the Eagle Tribune reported.

Jajuga’s lawyer Jeff Robbins told iMediaEthics by e-mail, “It appears to be the position of this particular defendant, an individual who owns and publishes this newspaper, that one can fabricate false and defamatory statements against a public official because, well, he’s a publisher of a newspaper and the other person is a public official. That, of course, is not the law, and we are pleased that the Court’s ruling clears the way for this publisher’s conduct to be placed on trial.”

iMediaEthics has written to the Valley Patriot to ask about the lawsuit and ruling.

A copy of the original lawsuit was published on the Eagle Tribune‘s website. The lawsuit lists “false and outrageous statements” including “that Mr. Jajuga had been a drug addict, was a corrupt policeman, had been under state and federal criminal investigation, was forced to resign from the State Senate, was caught ‘red handed’ being paid to lobby for a marijuana distributor and was fined by the Secretary of the State of the Commonwealth,” the lawsuit stated.

“The article asserted a long series of utterly false and fraudulent statements of purported ‘fact,’ each of which was intended to defame Mr Jajuga, and each of which did defame him,” the lawsuit claimed.