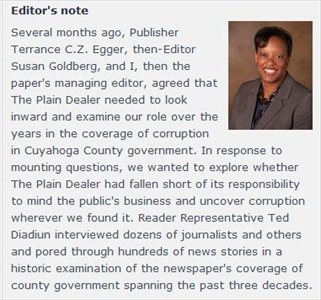 The Plain Dealer's editor Debra Adams Simmons commented on criticisms of the newspaper for its corruption coverage. (Credit: Plain Dealer)

Diadiun’s Nov. 28 column, “Where was the Plain Dealer over years of Cuyahoga County corruption?,” noted that the Plain Dealer had been sharply criticized for its reporting — and lack of reporting — on the scandal, which was broken by a July 2008 FBI raid. (See a list of the Plain Dealer’s stories on the scandal here.)  Kevin Kelly, for example, a “former school board president and county engineer’s employee,” was reportedly exposed as having accepted “gifts and bribes … in exchange for contracts with the district.”

As a result, Diadiun explained that he was asked by former editor Susan Goldberg and current editor Debra Adams Simmons to analyze the criticism and the Plain Dealer’s reporting. To complete his analysis, he stated that he “interviewed more than 30 current and former Plain Dealer reporters and editors, public officials and other sources, rooted through clippings, read online comments and  trolled our archives going back to the early 1970s.”

While Diadiun labeled the newspaper’s reporting “stellar” since July 2008, before then, not so much.  “Was the newspaper asleep at the wheel — or worse — as elected officials and their minions lined their pockets with the taxpayers’ money?” he questioned.  “Why didn’t the public’s watchdog bite, or at least bark?”

Diadiun criticized the newspaper for “a lack of aggressiveness, of failing to put together the threads of a story that a lot of people knew was out there, and — perhaps — of failing to be as tough as it should have been on people its journalists liked and  thought were doing a good job.”

While commending the Dealer’s reporting, he noted that the newspaper seemed to miss the big picture.  “Over the last decade, reporters have brought depth and perspective to” stories, he noted.  “Despite the ample clues, however, the paper never rooted out the nepotism, corruption and bribery that the federal investigation found.”

He also noted that “beating the feds to the punch” would have been hard for the Plain Dealer to do, as journalists can’t subpoena or wiretap in stories.

Also noteworthy, also noted that the Plain Dealer endorsed the three politicians “nearly every time they ran” — for a combined sixteen times. In a Dec. 4 column, Diadiun addressed endorsements, claiming that they “don’t skew news.”  He explained that endorsements are written and selected by the opinion writers, who are separate from the newspaper’s newsroom.  “Whatever errors The Plain Dealer might have made, a blurring of the line between news coverage and the endorsement process was not one of them,” he claimed.

“The information was there to get, and the Plain Dealer had reported some of it — but it did so incrementally and without cohesion or consistent followup,” he said.  “The paper never pulled what it had together into what could have been a fascinating public-service story of political corruption — and possibly led reporters to what the FBI found.”

“No stories were spiked, and no reporters said they were dissuaded from following up leads,” he asserted, debunking any suggestion that the newspaper could have pulled punches for friends.

In an editor’s note, Debra Adams Simmons, the editor of the Plain Dealer, stated that Diadiun’s analysis was “edited by an independent editor, John Walcott, the former Washington bureau chief for McClatchy and Knight-Ridder.”

iMediaEthics Journalism previously reported about the Plain Dealer’s outing of an anonymous commenter.  The commenter behind the “lawmiss” user name turned out to be a judge- Shirley Strickland Saffold, who in turn sued the newspaper for $50 million.

We also wrote in September about Donald Rosenberg, a former music critic for the Plain Dealer, who was suing the newspaper after he was removed from his beat.  He claimed that age discrimination and retaliation led to his beat-switching.