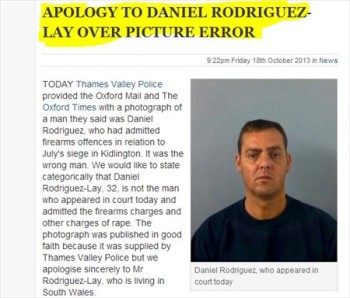 The Oxford Mail apologized for publishing the photo of the wrong man with a story. (Credit: Oxford Mail, screenshot, highlight added)

Rodriguez, not Rodriguez-Lay, pleaded guilty this month to “possession of a firearm at the time of committing an offence on July 9, possession of an imitation firearm, use of a firearm with intent and making use of an imitation firearm with intent,” the Oxford Mail reported in its news article. The Mail added, “Rodriguez will be sentenced for the offences on December 5, as well as three other counts of rape and one of sexual assault.”

“TODAY Thames Valley Police provided the Oxford Mail and The Oxford Times with a photograph of a man they said was Daniel Rodriguez, who had admitted firearms offences in relation to July’s siege in Kidlington. It was the wrong man. We would like to state categorically that Daniel Rodriguez-Lay, 32, is not the man who appeared in court today and admitted the firearms charges and other charges of rape. The photograph was published in good faith because it was supplied by Thames Valley Police but we apologise sincerely to Mr Rodriguez-Lay, who is living in South Wales.”

In addition to the apology statement, which was published on the Mail‘s website and Facebook, the article that originally carried the wrong photo also has a note about the error. That note reads:

“Thames Valley Police supplied us with a picture today saying it was Daniel Rodriguez that was published in good faith with this story. In fact it was a different man called Daniel Rodriguez-Lay, 32, and we wish to state categorically the image published earlier today was not of the defendant and apologise sincerely to Mr Rodriguez-Lay. The picture attached to this story now is the correct man.”

iMediaEthics has written to the Thames Valley Police, which the Oxford Mail said was the source of the photo, for confirmation that it provided the inaccurate image and for comment about the error. We’ll update with any response.