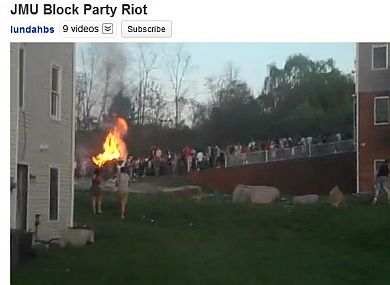 STUDENTS SETTING FIRES AT CAMPUS RIOT--The YouTube screenshot detail above is from a video of the April 10th Springfest riot at James Madison University in Harrisonburg, Virginia. Rockingham County's Commonwealth Attorney Marsha Garst, along with approximately six police officers, raided the university student newspaper and seized a a large cache of images that would identify both victims and perpetrators at the violent student melee. The April 10th brawl included bottle throwing at police and setting fires that produced injuries.

Did the April 10, 2010 violence at a Virginia student “Springfest” riot justify police raiding a student newspaper’s office to seize hundreds of photographs of the melee more than a week after the fact?

The Huffington Post reported April 19 that The Breeze is the only news outlet that has photographs of the riot, which took place near James Madison University in Harrisonburg, Virginia.

The Roanoke Times reported that on April 10, “At least 30 people were arrested and more than 40 injured when the off-campus spring gathering of more than 8,000 people turned into a melee, prompting police to don riot gear and launch tear gas at the crowd. About 200 officers tried to quash the rioting, which lasted for several hours. Police officers were injured, property was damaged and JMU’s president issued a statement saying the incident was ‘an embarrassment.’ ”

Society of Professional Journalists (SPJ) and the Student Press Law Center (SPLC) are calling the raid a violation of the federal Privacy Protection Act.

The act says, “it shall be unlawful for a government officer or employee, in connection with the investigation or prosecution of a criminal offense, to search for or seize any work product materials possessed by a person reasonably believed to have a purpose to disseminate to the public a newspaper, book, broadcast, or other similar form of public communication.”

Here is the back story:

On April 15, the office of the Rockingham, Virginia, Commonwealth Attorney Marsha Garst called James Madison University’s student newspaper The Breeze and requested copies of all of its photographs from a April 10 “Springfest” riot.  The Roanoke Times reported April 18 that its editor-in-chief Katie Thisdell refused to give any riot photos that weren’t already published on The Breeze‘s Web site.

“It’s not our responsibility as journalists to provide this information to the police,” The Washington Post reported Thisdell said.

After Thisdell refused, the county attorney’s office asked Mike Grundmann, faculty adviser for The Breeze, to order The Breeze to provide the photographs.  Grundmann said he had advised the paper against giving the photos, The Breeze reported.  The next day, Garst and at least six police officers showed up to The Breeze‘s office with a search warrant for “all electronic materials related to the Springfest riot with the purpose of identifying and prosecuting violent rioters,” according to The Breeze.  “The affidavit that gave the reasoning behind the warrant is sealed, and could be sealed for up to a year.”

Thisdell said Garst threatened to take all cameras, computers and documents if the unpublished photos weren’t given to her, The Washington Post reported.

“Basically, I didn’t have any other choice,” The Washington Post reported Thisdell said. “We can’t put out a newspaper without our equipment.”

The Reporter’s Committee for the Freedom of the Press wrote April 19 that only 682 of the 926 photos copied were from the riots.

The discs containing photos taken from The Breeze have been put in a sealed envelope now in the hands of a JMU faculty member until a resolution between The Breeze and the attorney’s office is made, WSLS wrote April 19.

The Student Press Law Center is representing The Breeze.  The Washington Post reported that its executive director Frank LoMonte said that the case is “one of the more outrageous cases I have seen lately.”

“To intimidate student journalists with a massive show of force and with no time to consult with legal counsel was grossly improper,” the Reporters Committee for Freedom of the Press reported LoMonte said.

The Society of Professional Journalists condemned the raid April 19 in a letter to Marsha Garst, which it published on its Web site.  In the letter, the SPJ wrote that its leadership is “outraged by your actions when you barged into the offices of The Breeze” and that the attorney’s office “has trampled on the freedom of the press by trying to use this media outlet as an arm of law enforcement. In a democratic society it is vital to have an unfettered press free to exercise the First Amendment without fear of government intervention.”

The SPJ letter went on, saying that the attorney’s office had other options instead of having to “bully the student newspaper” and that it should return everything, including copies, taken from the office with an apology.

The Student Press Law Center reported a letter was also sent to Garst by the president of Virginia Press Women, Gwen Woolf, “saying she was ‘dumbfounded’ upon hearing what had happened, referring to Friday’s incident as a ‘Gestapo-like raid.’”

The Roanoke Times reported Garst told The (Harrisonburg) Daily News-Record the search was “an attempt to get the violent criminals off the streets so they don’t hurt anyone else. The pictures were sought to identify those responsible for the violent crimes associated with the weekend riot.”

The event, Springfest, is organized by JMU students every year, The Washington Post reported.  Usually about 2,000 people attend, but more than 8,000 showed up earlier this month.  At least 17 were arrested.  The president of the university, Linwood Rose, e-mailed the campus that the student body’s behavior was unacceptable.  “Your collective behavior was an embarrassment to your university and a discredit to our reputation.”

UPDATE: 05/01/2010 10:11 AM EST:  The Libertarian Party of Virginia is calling for the resignation of Garst as a result of the incident, Virginia TV station WHSV reported.  Also, The Washington Post blogged April 28 that Virginia attorney general Kenneth Cuccinelli said he backs Garst’s actions. “I support any and all legal means to gather information to build a case against people who allegedly harmed or intended to harm law enforcement officers,” Cuccinelli said in an April 23 statement, The Washington Post reported.