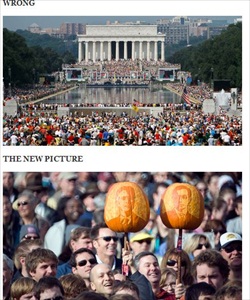 Jon Ward of the Daily Caller is credited with the find.  “I sent an email to some folks over there but didn’t hear back so although I don’t prefer calling things out on Twitter, cuz it seems like showboating, I figured it was the quickest way to get someone’s attention so they could change it,” Ward is quoted as telling Fishbowl DC.

He had tweeted Oct 30 “hey @politico, the picture on your front page is of the Beck rally, not the Stewart rally.”