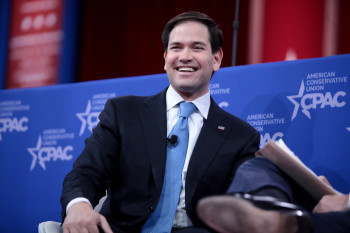 PolitiFact Iowa and the Des Moines Register messed up in a fact check but then seemingly put part of the blame on Marco Rubio’s campaign for not catching PolitiFact Iowa’s own error.

“PolitiFact Iowa is a partnership of the Des Moines Register and PolitiFact.com, a Pulitzer Prize-winning Web site of the Tampa Bay Times, to help you find the truth in politics,” according to its website.

The original PolitiFact Iowa ruling rated Rubio as “Pants on Fire” (or, totally wrong) for saying North Korea’s leader Kim Jong-Un has more than 2,000 nuclear warheads.  But in reality, Rubio said North Korea has “over two-dozen nuclear warheads.” After publication of the erroneous comment, Rubio’s campaign complained. PolitiFact Iowa then re-did its fact check, dialing down its ruling to “half-true.” (PolitiFact Iowa still criticizes Rubio for slightly exaggerating the estimated number of nuclear weapons — which the Wall Street Journal reports, based on a U.S. Congress estimate, to be between 10 and 16, and the Chinese say around 20.) 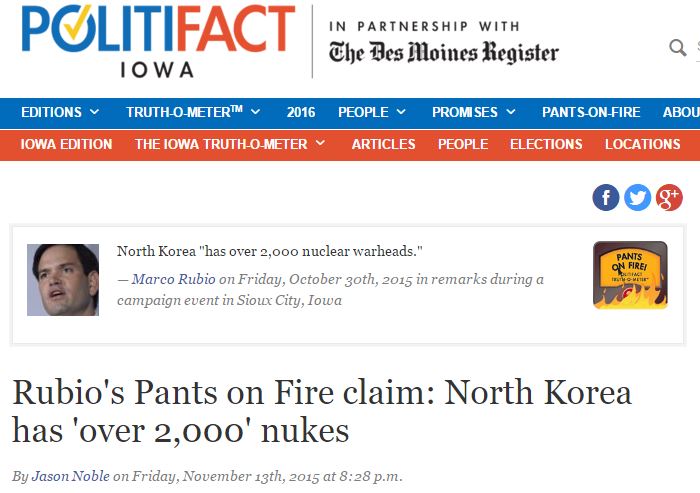 “And then you look abroad, and you see a world that’s increasingly dangerous. You have a lunatic in North Korea. A lunatic. Except he has over two-dozen nuclear warheads. And a long-range missile that can already reach the United States with that warhead on it.”

There is now an editor’s note — not a correction — admitting the mistake:

A link to the original article, which included the “2,000 nukes” claim in the headline and URL, now goes to an error page.

Below see a screenshot from a Google cache of  the now-deleted article. 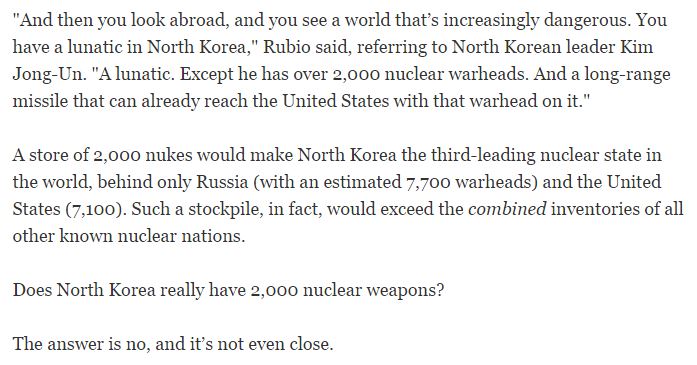 Last month, PolitiFact added an editor’s note to its fact check of Sean Hannity’s comments about the number of refugees slated to enter America. PolitiFact said Hannity was wrong to estimate 250,000 and that he was duped by a satire story, but Hannity pushed back, pointing to an Associated Press story as his source. PolitiFact still ruled that it thinks he’s wrong, but updated its original commentary.

Maybe we need a site that fact checks the fact checkers?