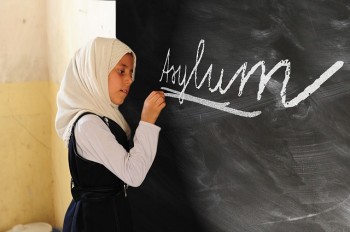 Was Fox News’ Sean Hannity duped by a satire story claiming the U.S. was letting 250,000 refugees into the country?

Hannity said earlier this month: “You see the backlash emerging now in Europe over the refugee problem from Syria and Iraq. The president said he’s going to bring in 250,000 refugees into this country.”

Fact-checking website PolitiFact busted Hannity for apparently falling for figures from a satire website, but Hannity doubled down after PolitiFact’s report, arguing PolitiFact is just a “left-wing website” and that his figures were legitimate.

Hannity also said his 250,000 figure wasn’t an estimate of how many Syrian refugees were entering the U.S., but instead all refugees.

In response, PolitiFact posted an editor’s note to its fact check, which ruled his original comments as “Pants on Fire.” But, the ruling still stands.

“Editor’s note: After this fact-check originally published, Sean Hannity responded and provided the source of his claim. We have updated the fact-check to include his source and our analysis of it. The original version of this fact-check is archived here. The ruling remains Pants on Fire.”

PolitiFact’s revised ruling wrote of Hannity’s estimation: “That math is right, but none of it makes Hannity’s claim accurate. The Associated Press report Hannity cited is discussing the total number of refuees admitted to the United State worldwide,” where Hannity was “discussing refugeees coming from Iraq and Syria, fearing they might be infiltrated by ISIS or al-Qaida.”

Further, PolitiFact wrote: “In reality, the commitment Hannity talks about largely has been the standard practice of the United States going back decades. The United States has been accepting on average more than 83,000 refugees a year worldwide from 1980-2008, State Department records show.”

Based on its analysis of State Department records and the claims, PolitiFact reported: “Overall, Obama is asking the country to take in an additional 45,000 refugees in 2016 and 2017. Most, but not all, of those additional refugees will come from Syria. Hannity’s claim rates Pants on Fire!”

Hannity said on air in an interview with Jeb Bush earlier this month that “You see the backlash emerging now in Europe over the refugee problem from Syria and Iraq. The president said he’s going to bring in 250,000 refugees into this country.”

“I’ve never heard that, and that would be impossible to imagine logistically for us to screen,” he added, PolitiFact reported.

PolitiFact noted that the 250,000 number didn’t end in the one conversation with Bush. Hannity repeated the claim while interviewing Donald Trump, who then repeated it “at a town hall meeting broadcast live on NBC.”

See the video clip of Hannity’s comments, made to Jeb Bush, and later to Donald Trump.

The 250,000 refugees claim apparently came from satire website Real News Right Now. “The website reported that State Department spokeswoman Cathy Pieper announced that 250,000 Syrian refugees would be resettled on tribal reservation lands in Arizona and North Dakota,” according to Politifact, which noted that Pieper herself appears to be a fictitious character.

While Real News Right Now’s website doesn’t specifically label itself as satire, the “about” page identifies the author R. Hobbus J.D. as a specialist in two-dozen areas, from space travel to animal rights to paranormal activity, along with being the recipient of the “Stephen Glass Distinction in Journalistic Integrity” and the “Oscar Mayer Award for Journalistic Excellence.” [Stephen Glass is a former journalist who fabricated numerous magazine stories in the 1990s].

iMediaEthics wrote to Fox News to ask if it will correct or has corrected after the PolitiFact report.