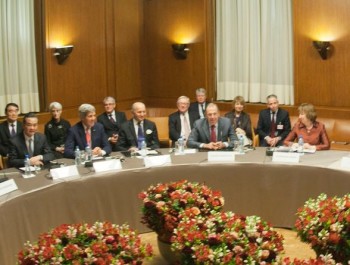 The ministers of foreign affairs of Germany, the United Kingdom, China, the United States, France, Russia, the European Union and Iran meeting in Geneva for the interim agreement on the Iranian nuclear programme (November 2013).(Credit: U.S. Department of State, Wikimedia.org, Detail)

If we didn’t know better, we might read recent media poll results and think the American public is downright stupid.

So, the American public expresses strong majority support for an agreement that the same public feels, by a strong majority, would not work. These results might make one question the so-called “wisdom of the masses.”

Well, except for media pollsters, who cannot afford to note the 900-pound elephant in the room: The public doesn’t know what it’s talking about. Let’s poll them anyway.

In fact, the Pew poll, also just announced, found that only one in four Americans had heard “a lot” about the negotiations between Iran and the United States.

So, while ABC/WP is telling us the public strongly supports an agreement with Iran, Pew tells us that not even a majority approves of just negotiating with Iran in the first place.

Try explaining that in some rational framework.

Pew’s conclusions, by the way, contrast sharply with those produced by CNN two weeks earlier, which showed the public favoring direct diplomatic relations with Iran over its nuclear program by a margin of 68 percent to 29 percent.

Thus, Pew shows a mere 8-point margin in favor, while CNN finds a 39-point margin. Yes, the Pew poll was conducted later than the CNN poll, but that is highly unlikely to explain the difference between the two sets of results.

CNN wording: “Do you favor or oppose direct diplomatic negotiations between the U.S. and Iran in an attempt to prevent Iran from developing nuclear weapons?” (italics added)

Pew wording: “From what you know, do you approve or disapprove of the United States negotiating directly with Iran over the issue of its nuclear program?”

Pew didn’t tell its respondents why the negotiations were being held. CNN did. And in doing so, CNN gave a positive reason for the talks, leading most respondents to agree that – yes, indeed! – seeking to limit nuclear weapons is a good idea.

What these polls show is how little Americans know about the specific negotiations with Iran, and thus how easy it is to produce different responses by changing the amount of information respondents are given.

These polls are not giving us “public opinion” in any meaningful sense of the term. They are manufacturing a semblance of public opinion, by measuring mostly non-attitudes and claiming the results represent the will of the public.

If the latter were true, the country would indeed be in deep trouble.