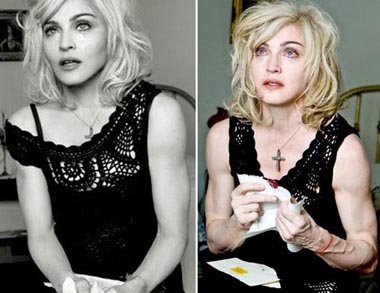 See above, compare the photo used in ad campaigns (on left) with the supposed leaked "unedited version" of Madonna (on right). (Credit: E! Online)

Leaked photos of Madonna’s recent Dolce & Gabbana ad campaign offer an older, less perfect image of the 52-year-old pop star. But, who leaked them? Does iMediaEthics really have to say “leaked on the Internet” is not a proper attribution?

What website or news outlet first published these images?

Despite the countless news and entertainment reports about the photos – all commenting on the differences between the photos, StinkyJournalism still hasn’t been able to find out who leaked the images.

The leaked photos reveal Madonna “appearing blotchy and tired, with veins protruding from her lower arms and biceps,” Australian news site News.Com.Au explained.  As widely reported, Madonna’s veins are much more “soft and smooth” in the advertising photos. See a mixture of photos both used as ads and labeled as “unphotoshopped” here on The Daily Blemish.

The Chicago Sun-Times’ Bill Zwecker even added that Madonna is not OK with the leaked photos.

“Apparently when Madonna spied those unretouched photos of her from a Dolce & Gabbana ad campaign — leaked on the Internet — the superstar went super-crazy with anger,” Zwecker reported.  Further, he reported that “as a result there’s an intense investigation under way to discover who was responsible for letting the world see the Material Mom looking so haggard.”

But, who told Zwecker that?  StinkyJournalism hasn’t been able to find any comment from Madonna or her spokesperson condemning the photos. StinkyJournalism wrote to Zwecker asking about his sourcing, and will update with any response.

Some of the Madonna-approved images appeared in the Italian version of Vanity Fair last year, appearing next to an article explaining why Madonna was selected as the “muse,” RTE reported.

While iMediaEthics loves a good Photoshop or fake photo debunking story (See here, here, here, here and here for some examples in just the past month), it’s important to remain skeptical even when supposed “original” photo or story is revealed.

We even have to wonder if the alleged pre-photoshopped images that make Madonna look older, weren’t, well, faked themselves by her handlers or by Dolce & Gabbana as a viral marketing ploy? After all, this unsourced “leaked photo” kurfuffle effectively keeps her and Dolce & Gabbana’s ad campaign in the news a whole year after they paid for advertising space.

Are we being double duped?

No media outlet seems to care.

After all, this isn’t the first time Photoshopped photographs of Madonna have made the rounds on blogs and news sites. StinkyJournalism wrote last year when Gossip Cop decided MatrixPhotos.com’s Madonna picture with “scary arms” was likely a fake.  The “scary arms” photo circulated the web as she was criticized for being “too toned,” Gossip Cop explained.

We also wrote last year about other un-Photoshopped images of Madonna – taken for a Louis Vuitton ad campaign – that were leaked.

Some unaddressed questions we have in this latest case…We are writing Madonna’s team, Dolce & Gabbana and the Chicago Sun- Times to ask :