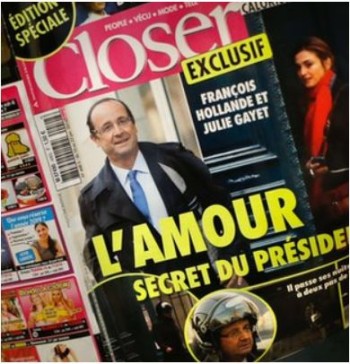 France’s Closer magazine is again being accused of invasion of privacy, this time by French president Francois Hollande.

In 2012, the UK Royal Family sued the magazine for invasion of privacy after it published topless photos of Kate Middleton, the Duchess of Cambridge, sunbathing on vacation at a private house.   Middleton and Prince William also got an injunction to prevent the magazine from publishing the photos again.

This month, Closer published a seven-page report with photos claiming that the French president Hollande was having an affair with actress Julie Gayet, the Guardian reported.

Closer‘s editor Laurence Pieau said she would unpublish the report because Gayet’s lawyer filed an injunction but not because of the president’s complaints.  In a statement published by the Guardian, Pieau said

“Julie Gayet’s lawyer contacted us to ask that we remove from our website all mention of this relationship and to do the same with Google… We will withdraw the news , probably this evening [Friday] because it is a very clear injunction. However, we have had no contact with the Elysée.”

Despite the unpublishing, the print edition of the report was left out for publication, according to Sky News.

The Guardian noted of the alleged affair: “Whether it was true did not matter,” because what is at issue here is “France’s draconian privacy laws.”  As an explanation, the newspaper pointed to American University of Paris professor Matthew Fraser.  In an opinion piece for CNN, Fraser explained:

“French law, by contrast, is indifferent to truth. In France, protecting personal privacy trumps the truth. In France numerous politicians and celebrities have successfully sued gossip magazines for violating their privacy.

“In most cases, however, damages awarded are relatively modest. “Closer” magazine — even if it loses a lawsuit brought by Hollande — will likely pay a small fine compared with the huge profits from newsstand sales of the alleged Hollande sex scandal edition.”

iMediaEthics has written to Closer and Hollande’s office for more information and will update with any response.

Last year, Agence France-Presse and Reuters retracted a photo of Hollande that showed him looking goofy.  They said the government didn’t ask for the retraction but rather the photo just wasn’t good. AFP director of information Philippe Massonnet said on the AFP’s blog that it’s “the AFP’s policy to never distribute a free image that ridicules people.”