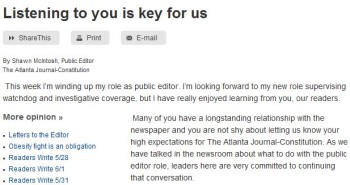 The Atlanta Journal-Constitution is ending its public editor position, according to a May 25 column by its outgoing public editor Shawn McIntosh.

McIntosh wrote that she is leaving the position for a “new role supervising watchdog and investigative coverage,” and that she won’t “be replaced with a new public editor.”

“Instead, we’re asking our entire newsroom leadership team to take on some of the public editor duties of listening to readers and responding to their concerns.”

According to her public LinkedIn profile, McIntosh has been the public editor since April 2009, after nine months as the newspaper’s “deputy managing editor/News and Information.”   Her predecessors include Matt Kempner and Mike King.

We wrote to the Organization of News Ombudsman’s executive director, Jeffrey Dvorkin, asking how many ombudsmen are left in the U.S. (McIntosh was listed as one of ten U.S. memberson the organization’s website.)  Dvorkin explained “I think 9 is the correct number. We are in the process of determining the nature of full membership, associate membership and affiliated membership.” (Disclosure: iMediaEthics‘ publisher, Rhonda Roland Shearer, is an associate member of the organization andattended the annual ONO conference in Copenhagen last month.)

According to Dvorkin, the role of ombudsmen has been changing.  He wrote:

“Ombudsmen are no longer the somewhat isolated figures of even a few years ago. Some do work for their media that includes handling letters to the editor and other tasks related to relations with the public. The media business is changing rapidly and so should the definition of what a news ombudsman does. ”

According to the AJC‘s response, the newspaper set up a public editor role in 2000 and that the role is being ended because: “The newsroom leadership team decided that funneling all reader input through a single source no longer makes sense with so many feedback channels for readers. While there will not be a single dedicated public editor, the newsroom will still respond to reader feedback.”

We also asked how the job will be split among “newsroom leadership” and who will handle what duties and were told “The three managing editors will respond to reader concerns in their area and McIntosh will continue to coordinate reader research. “