Radio host Bruce Bond quits after being told not to talk about politics, Trump

Radio host Bruce Bond quit Harrisburg, Pennsylvania rock radio station WTPA after his boss told him to stop talking negatively about Pres. Donald Trump. However, the station explained to iMediaEthics it wasn’t just Trump. Bond, who had worked for the station for just over three years, wasn’t supposed to be talking about politics at all, the station said.

The resignation came to light when Bond posted about it on Facebook. He included a memo from his General Manager Tim Michaels that stated in part, “it is not permissible on WTPA airwaves to talk disrespectfully of the President.” Instead of abiding by that rule moving forward, Bond says he quit.

While headlines this week have focused on Bond’s quitting over a ban on talking about Trump, iMediaEthics exchanged e-mails with both Bond and WTPA’s general manager Michaels to learn the full story.

Michaels told iMediaEthics the core of the problem was Bond had an entertainment, not a political, show.  “Bruce Bond was hired for the purpose of hosting an entertainment type show,” Michaels explained to us. “He was cautioned many times about turning it into one of a political nature.” Michaels went on to explain WTPA “does not take a position on the air politically as we are a classic rock station, and we know that we have listeners of all political affiliations listening to our station.”

“We do not wish to offend anyone of any political party,” Michaels told iMediaEthics. “Bruce crossed the bounds of what was acceptable,” generating “a large number of emails and phone calls from angry listeners.”

“Bruce Bond did not want to comply with a company directive that had been in force for quite some time,” he explained.

Bond confirmed with iMediaEthics that he had been warned a few times against discussing politics. “I was told 3 or 4 times in the past to not talk about politics, which I found impossible to do since I talk about what is going on in the world.”

Bond explained that the station added a “policy of no politics” in December 2015 , about a year and a half after he was hired. (Michaels confirmed this memo, which he admitted everyone except Bond followed.)

Bond told iMediaEthics that he and WTPA’s general manager Michaels had discussed having a disclaimer before his show telling listeners “this is a talk show and I have my freedom of speech opinion and you are welcome to tune back after the show at 12 noon if you don’t like my opinions.” That discussion, he claimed, was prompted by complaints about his political comments.

iMediaEthics asked to see evidence of his claims. As evidence, Bond provided an e-mail from November where he suggested having a “general show disclaimer now and then,” and said he didn’t “plan on doing any heavy politics.” When asked by iMediaEthics, Michaels didn’t recall this agreement, telling us he “would not have agreed” to telling unhappy listeners to change stations. Michaels noted that a disclaimer did not fix the problem of Bond not following the “no politics” rule. Bond also provided iMediaEthics the “disclaimer card” he read on air and an audio clip of the disclaimer. Michaels maintained that “the disclaimer has no relevance” to Bond’s disagreement with the company policy. 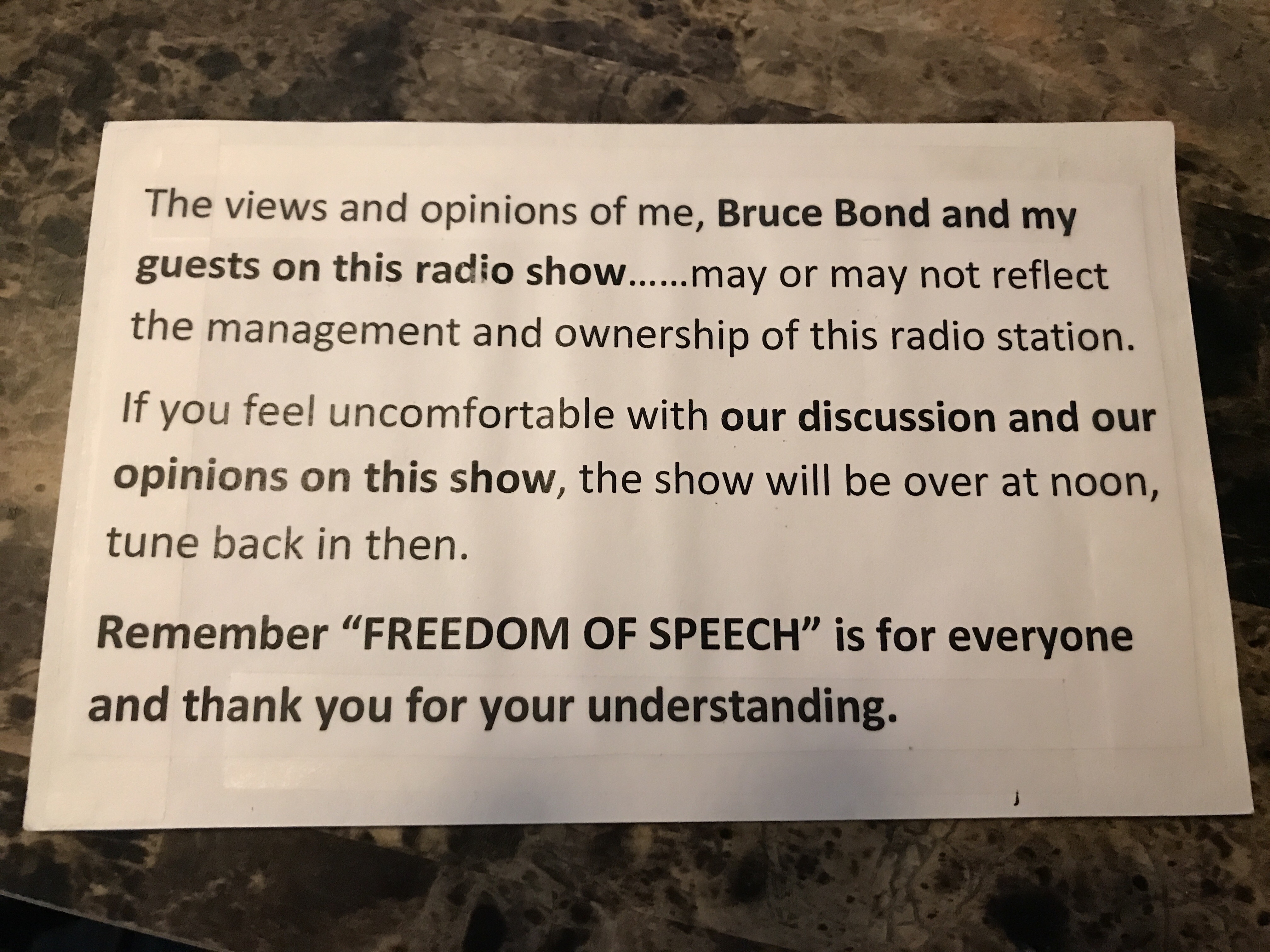 Bond has a controversial past, Penn Live noted. “He was hired at WTPA almost exactly three years ago, following a career filled with both acclaim and condemnation. He returned to the area in 2013, following a two-year prison sentence for fraud.” When iMediaEthics asked about this, Bond said he apologized and served his time and questioned the relevance of it.

Radio host Bruce Bond quits after being told not to talk about politics, Trump