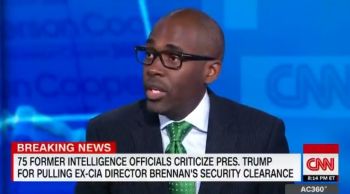 CNN suspended commentator Paris Dennard after the Washington Post revealed Dennard was fired from a previous job at Arizona State University for making “sexually explicit comments and gestures toward women” in 2013 and 2014.

A CNN spokesperson told iMediaEthics by e-mail, “We are aware of reports of accusations against Paris Dennard. We are suspending Paris, effective immediately, while ‎we look into the allegations.”

The Post‘s story, published Aug. 22, reported that “An internal investigation by the university concluded that Paris Dennard, a surrogate during the campaign and now a member of the President’s Commission on White House Fellowships, told a recent college graduate who worked for him that he wanted to have sex with her.”

Dennard’s website states that he is “a CNN Political Commentator,  Analyst for NPR’s Here and Now, and Opinion Contributor for The Hill.”

NPR spokesperson Isabel Lara told iMediaEthics, “Dennard is not an NPR employee. He has been a guest on Here & Now, a show we co-produce with WBUR. We take these accusations, and the safety and well-being of our staffs, very seriously.”

“Paris Dennard is not an employee of NPR. He has provided periodic contributions as a political commentator on Here & Now, a program NPR and WBUR coproduce. We are deeply concerned by the recent report about his alleged conduct at Arizona State University. WBUR is suspending usage of Mr. Dennard on Here & Now, effective immediately, pending further review.”

The Hill‘s spokesperson Kaitlyn Kurosky told iMediaEthics by e-mail, “The Hill will not be accepting opinion submissions from Dennard while the investigation is ongoing.”

We’ve also e-mailed Dennard for a response to the allegations and suspension.