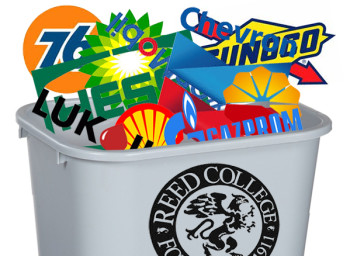 A fake press release claimed Oregon’s Reed College announced that it was going to divest its holdings of fossil fuel stocks.  Both the Portland Tribune and KBOO were duped by the hoax, which was orchestrated by the pranking group The Yes Men’s Igor Vamos and the Fossil Free Reed Campaign.

Vamos was the guest commencement speaker at Reed College this week. During his speech, which iMediaEthics obtained a copy of from Reed College, Vamos announced the fake news that Reed decided to divest fossil fuel stocks.

After Vamos’s prank announcement at the commencement speech, he then “sent a fake press release to publicize his faux news, and created a fake website,” according to the Tribune.

The press release was titled, “News Celebrated at Commencement Ceremony” and made the following claims:

“Reed College’s Board of Trustees approved with a majority vote a plan to divest its endowment of direct coal and oil industry investments and redirect funds to environmentally conscious investment managers and community owned renewable energy projects during a special meeting convened near the end of the academic term.”

A dream come true for campus environmentalists, but it wasn’t true, as Reed College Director of Strategic Communications’ Kevin Myers told IMediaEthics by e-mail. “The Reed Board of Trustees has made no decision on fossil fuel stocks–to date,” Myers wrote. “They are, however, currently deliberating the matter.”

iMediaEthics has asked Reed College if they were cautious about inviting a member of a known hoaxing group who might perpetrate a hoax on the school.

“I think we were all expecting that he would pull some kind of prank, but I think most of us thought it would be isolated to the stage–or the confines of Reed’s campus,” Myers said. “I don’t think anyone (and by anyone I mean the administration) considered that he might pull something as far reaching as he did.”

Both the Tribune and KBOO were duped.

The Tribune published a short news story about the press release, but quickly unpublished it after Reed College’s director of strategic communications Kevin Myers tipped the Tribune off to the error.  The Tribune then published a follow-up story explaining the error.

The Tribune admitted to having been hoaxed in a follow-up story.

The link for the original article now goes to an error page.

A Google Search for “reed college fossil fuel” produces the headline and first line of the story. The story was titled “Reed agrees to divest fossil fuel stocks,” and was apparently published around 5 PM EST Monday.

The first line of the story reads: “Reed College announced Monday that it will sell its endowment investments in oil and coal stocks, joining the divestment movement to raise …”

See below an image of the search results.

Reed College’s “independently run student newspaper” The Quest has a screenshot of the original Tribune article.

KBOO published the fake press release on its website, but it also was quickly unpublished. The link for the press release now goes to a page saying “Sorry, this page is restricted. Did you forget to log in?”

The link for KBOO’s publication of the fake press release goes to this page.

Reed College’s Myers added that CBS-affiliate KOIN dodged a bullet because they fact checked. The station “called me to check on the accuracy of the release” but didn’t publish.

Who are the Yes Men & Who Else was involved in Prank?

The Yes Men is “a performance group which stages sophisticated political satire, often impersonating industry or government officials and posting mock websites,” according to Reed College.

“Reed College has tens of millions of dollars invested in the companies responsible for climate change. We will continue celebrating the possibility of a better world until the Board of Trustees makes the right decision. We are committed not to let our college tout itself as sustainable as long as it is funneling its money into fossil fuel extraction.”

Back in 2011, the Yes Men duped the Associated Press, Dow Jones and other news outlets with a fake press release saying that General Electric was giving the U.S. Treasury back a $3.2 billion tax refund, as iMediaEthics reported at the time.

iMediaEthics has written to the Portland Tribune and KBOO for more information and further comment. We’ll update with any additional information.