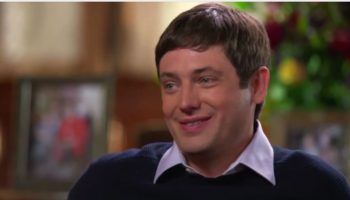 Burke Ramsey, above during an interview with Dr. Phil this year, is suing over a documentary about the death of his sister, JonBenet Ramsey. (Credit: Dr. Phil/screenshot)

Burke Ramsey, the brother of JonBenet Ramsey, is suing CBS for $750 million over the network’s documentary about his sister’s 1996 death that indicated he might have been responsible. “The gist of The Case of: JonBenet Ramsey is that JonBenet’s brother, Burke Ramsey, killed his six-year-old sister,” the lawsuit reads.

Ramsey’s lawyer, Lin Wood, sent iMediaEthics the 108-page lawsuit. “I would only urge that the Complaint be reviewed as it exposes the fraud of CBS and clearly establishes why Burke’s libel case will be successful,” Wood told iMediaEthics by e-mail.

Ramsey, who is 29 now and was 9 when his sister died, denied being involved in his sister’s murder and his lawsuit notes that he was “repeatedly, publicly, and unequivocally cleared … of any involvement in the death of his sister.” The lawsuit notes that Burke Ramsey doesn’t issue public statements except for one September 2016 interview with Dr. Phil McGraw. He gave that interview because he thought CBS was going to accuse him in the documentary and wanted to respond.

A CBS spokesperson declined to comment to iMediaEthics about the lawsuit. An e-mail to Critical Content’s media spokesperson bounced back.

“CBS and Critical Content knowingly and intentionally published false and defamatory statements conveying that Burke killed JonBenét, engaged in a criminal coverup with his parents and lied to the police,” Ramsey’s lawsuit says.

Ramsey’s lawsuit alleges the documentary was “a fictional crime show” and “a fraud upon the public,” saying that it was “Based primarily on a preconceived storyline scripted in a self-published and commercially unsuccessful book, Foreign Faction.” The lawsuit says Ramsey didn’t sue over the book because it was “ridiculous” and a “miserable failure” with “no audience” or publicity.

Ramsey is also suing CBS media expert Werner U. Spitz in a separate lawsuit for his comments in the documentary and a CBS Detroit radio program, according to the Denver Post.

Ramsey has previously pursued lawsuits when accused of killing his sister, the Post reported. “Ramsey sued the Globe, the Star and the New York Post in 1999 and 2000 for libel. He later received settlements in each of the lawsuits, the lawsuit says.” iMediaEthics has written to the Post, Globe and Star for confirmation of the settlements.

According to CNN Money, the lawsuit says that “While Defendants’ false accusations against Burke echo the accusations made against him by supermarket tabloids years ago, the key difference is that this time, the accusation was published by the most respected member of the American broadcast media, CBS.”