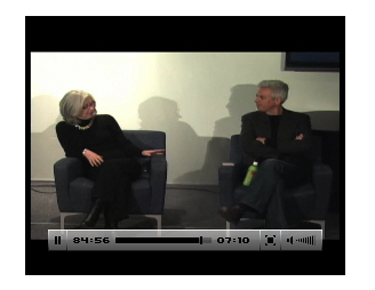 A video still from a discussion on covering contested science at NYU.

Sometimes disagreements over media coverage of science and medicine hinge on one side taking the “side of science” and the other opposing that side.  But it also happens, that two experienced and intelligent science reporters look at the same science and come to two completely different, or even opposing positions.  December 10, NYU’s graduate Science Health and Environmental Reporting Program (SHERP) hosted a discussion with two reporters writing about the H1N1 flu vaccine, Shannon Brownlee, and Michael Specter, who have each come to some different conclusions in their own exhaustive reviews of the science.

Brownlee recently wrote a piece for the Atlantic Monthly called “Does the Vaccine Matter?” arguing that the science on the flu vaccination’s efficacy is lacking. Specter penned a short New Yorker piece in October, arguing that fear of vaccines and resistance to flu vaccination are groundless.

The lecture was taped, and a video is available here for anyone who wants to listen to the two hash it out, with moderator Ivan Oransky MD, Executive editor at Reuters Health. For those who don’t want to browse the video, Brownlee and Specter seem to agree on one important point: that flu vaccines, like all vaccines, are safe–far, far safer than the diseases the protect against. In general, choosing not to get vaccinated or choosing not to vaccinate your children, is to choose to be much more at risk of dying or being hurt, and make the rest of the nation much more at risk of dying or being hurt than if vaccinated.

Flu vaccine, though different than other vaccines, is still much safer than the flu. Swine flu vaccine is also safe. “It’s probably as safe as seasonal flu vaccine, which is pretty safe,” Brownlee says in the video.  “It’s the same as the flu vaccine,” Specter adds. “The safety profile is about as high as a vaccine can be.”

So where do the two diverge?  Brownlee argues that the wealth of evidence on how well flu shots actually work, especially to protect the people we are told are most vulnerable to dying from the flu, is not very compelling. Data finding 60 to 80 percent reduction in mortality are from cohort trials, in which the deaths of one group (vaccinated) is compared to another (unvaccinated). Brownlee explains cohorts are not the best way to test how well the flu vaccine acutally works. It’s possible that the reduction in death is because more healthy people choose to get vaccinated, and this healthiness, not the vaccination, keeps them from death.  She argues if the vaccine might not be very effective, maybe it’s not worth it to vaccinate. She supports calling for placebo-controlled trials of flu vaccine.

Specter argues that if the risk of vaccines was higher, he might agree with Brownlee, but since the risk of getting a flu shot is so very, very low it doesn’t make sense not to vaccinate. Just because studies look at cohorts doesn’t mean they’re bunk, he says. “You can say healthy people tend to get vaccinated at a greater rate. That’s actually true… But there are also cohort studies with sick people, minorities, inner cities, and those numbers don’t disappear for them.” Specter says we should work to improve vaccine manufacturing so that we can vaccinate even more people. “I think we should vaccinate everyone for the flu,” he says. “Everyone.”

The disagreement seems to hinge on what you should do when you know something is safe, but you might want more data that it actually works, both as a journalist, and consequentially, as a citizen. Brownlee says be wary, Specter says such wariness isn’t warranted in this particular case. It all goes to illustrate how complicated actual journalism can be. It’s not a matter of “objectivity.” Two writers with the same data certainly can (and do) disagree.

Full video of the discussion is available here.