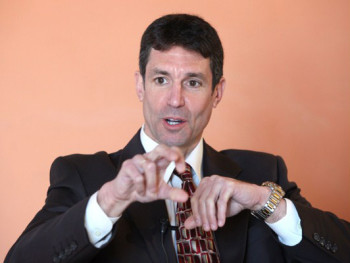 The Huffington Post unpublished two blogposts by Yale nutritionist David Katz after it was revealed he wrote articles praising his own book. However, the conflict in the blogposts wasn’t obvious because Katz’s book was written under a pseudonym.

Katz is a Clinical Instructor in Medicine at Yale, which identifies him as a “nationally recognized authority on the prevention of chronic disease, nutrition, and weight management.” His website lists him as the founding director of Yale’s Prevention Research Center, the president of the American College of Lifestyle Medicine, and author of “roughly 200 scientific articles and  textbook chapters, and 15 books to date.”

According to Retraction Watch, Katz’s two “incredibly favorable reviews of reVision,” his book, “implied he had discovered the novel as a reader.”

The Huffington Post deleted both of the reviews, with one of the reviews being replaced with a note explaining there had been a “previously undisclosed conflict of interest.”

Last year, Katz came clean and fessed up to being the author of reVision and using the fake name Samhu Iyyam.

In a Huffington Post blogpost, Katz explained why he used the fake name and argued it wasn’t a “scandal.”

“For reasons related mostly to the integrity of the tale, the “author” could not be me- so the book was written under a nom-de-plume. Attempting to preserve that separation between myself and the author, I soon realized that left me with no way to tell anyone interested in my writing about this book, which I honestly consider the best thing I’ve written. I decided to write a blog about it in the third person, and express my opinion. As noted, the writing in question was not compensated.

“But of course, that was a naïve solution. It still left me with no reasonable basis to refer to the book again. So I disclosed that reVision was indeed mine, although it is more correct to say that my imagination is parent to the author, Samhu Iyyam, than to say that she is me.”

As Yale Daily News summarized, Katz’s reviews weren’t just kind, they were “glowing.” Katz’s review said his book had “lyrically beautiful writing” and was on the same-level as Plato.

“I finished with a sense of illumination from a great source,” he wrote, according to Yale Daily Review. “The most opportune comparison may be to a fine wine.”

Katz defended his undisclosed conflict of interest in praising his own book secretly, telling the Yale Daily News: “I wrote a … review of my anonymously self-published fiction novel, and said what I really think about it — then disclosed that I wrote it,” Katz said. “There’s really a story there?”

Katz told iMediaEthics by e-mail he writes for the Huffington Post “in an entirely ‘volunteer’ capacity.”

“There is no contract, and there is NO compensation,” he said, adding that he usually writes about “health promotion and disease prevention, and interpretations of scientific studies in these areas.”

“The content of my blogs is entirely up to me, but is then subject to processing by editors at HP,” he wrote. Katz said he used to submit to editors to publish, but recently he was able to publish directly to the website. That has been revoked, he noted.

“The blogs are submitted to editors, but in my case, they rarely did any editing- although they had the right to do so, or to ask questions. In fact, rather recently, I was told- perhaps as a ‘reward’ for contributing reams and reams of high-quality content that did not require any editing, that I could post directly to the site, without passing through editors. This was implemented only very recently, long after the two blogs about reVision, which appeared roughly a year ago, to the best of my knowledge. I note, however, that since this kerfuffle, that direct access to the site seems to have reverted back to the former two-step process: submit to editors, who then make the piece live.”

Katz said the self-publishing company for his book “suggested I blog about the book in the third person, as I did.” Katz said “Very few people ever read those columns, and virtually no copies of the book were sold as a result. I have not made 1 cent as a result of those columns,” he said.

Katz said Huffington Post never told him they were deleting his blogposts. He added,  “I am insulted by their presumption, fair weather friendliness,  rush to judgment, thanklessness, and incivility. Other than that, I presume the reversion of my ‘post directly’privilege back to the standard ‘submit to editors’ is related to all this, although no one has bothered to tell me that directly.”

Katz also argued he was following “a long and well-established tradition,” pointing to Dr. Seuss and Mark Twain as pen names whose work was promoted by their authors. He likened what he has done to sharing a recipe he created with a soup kitchen without telling people it was his own recipe.

In a LinkedIn post after iMediaEthics’ inquiry, Katz argued the retractions were “inconsequential” given how long ago the posts were written and how few people read them. Katz also commented that he thinks the issue of Huffington Post retracting his blogposts got more attention because of a recent controversy about nutrition guidelines. (More on that over at Retraction Watch.)

In a follow-up e-mail, Katz conceded, “I certainly had a conflict: how to make my readers aware of the book while respecting the alter-ego firewall.” But Katz maintained his claim that his self-promotion didn’t benefit him very much and added that he thinks that many of the writers in the Healthy Living section promote their own work with conflicts of interest.

Peter Heimlich asked editors at the Huffington Post about Katz’s blogposts in question, he wrote on his website The Sidebar.  He learned from standards editor Victor Brand that the post was removed.

“Today, after I brought facts to the attention of editors, the Huffington Post has scrubbed two problematic 2014 columns by Dr. Katz,” he wrote. Heimlich apparently made a lot of effort to get Huffington Post’s attention, uploading his e-mails with the site.

After not hearing back from the Huffington Post’s Monica Lee, he e-mailed: “I phoned you about a week ago and left a message. I never received a reply either. At the time, I assumed you might be a low-level employee giving us the brush-off, but per your LinkedIn, I just learned that you appear to be in charge of communications at the Huffington Post.”

Then Heimlich went to Victor Brand at the Huffington Post: “I’m apparently getting stonewalled by your company’s communications Vice President Monica Lee.” Brand responded that the post had been removed.