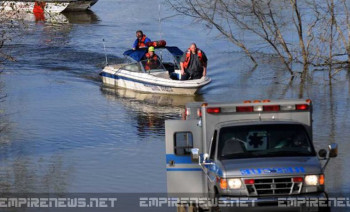 Image of unknown police boats that accompanied satire article that reported the discovery of at least 17 dismembered bodies in Kentucky. (Credit: Empire News)

Many social media users have been duped by a satire story claiming 17 dismembered bodies were found in Kentucky.  The satire story had 200,000 shares on Facebook as of July 9 for its publisher, Empire News.

The phony story included the quote: “Kentucky law requires that an attempt be made to resuscitate if possible,” said Joseph Goldsmith, a member of the search and rescue team.  “I know it seemed to be a long-shot, given the body was in several different pieces, but they require us to make an attempt.”

“Two of the bodies identified so far have been determined to have extensive criminal records; we are considering the possibility that these murders could be inspired by the television series Dexter.”

If that wasn’t enough of a heads up the story was fake, the author of the article, A. Michael Smith claims in his biography he graduated from Harvard in 1642 and was “cryogenically frozen and brought back to life in 1981.”

“I can speak gibberish in 18 different languages and often carry on conversations with myself in all 18,” his bio states.

The story may have been inspired by the real news story that a human leg was discovered in Kentucky earlier this month, the International Business Times reported.

There are also tons of tweets about the false news.