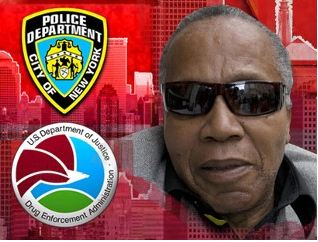 Retired NYPD and DEA agents are suing over comments made by drug trafficker Frank Lucas. (Image from ABC News).

Several retired NYPD and DEA agents are suing for libel. The lawsuit stems from the 2000 New York Magazine article “The Return of Superfly“, a profile of 1960s-70s drug trafficker Frank Lucas. The article led to the film “American Gangster” and was re-released on the magazine’s website in 2007, creating a wider audience. The agents are suing Lucas, writer Mark Jacobson, New York, publisher Grove/Atlantic and Primedia (New York’s former parent).

According to the plaintiffs, the libel occurred in the article’s description of, and Lucas’s comments regarding, the day the agents raided Lucas’s house. In the article, Lucas claims the agents stole millions of dollars in cash during the raid. According to police records, the police legally seized $585,000 in small bills, not the “9 or 10 million” that Lucas claims.

From the lawsuit: “Jacobson wrote the following passage in Superfly with respect to the search of Lucas’ house: ‘ Those motherf…… just came in.’ Lucas says now….For years, he has contended that the cops took a lot more than $585,000 from him.”

In addition to Lucas’s libelous statements, the officers are looking to have their names cleared of statements made in the final scenes of “American Gangster.” The statements wrongly claimed that Lucas’s cooperation during the investigation helped expose corrupt police work.

In December 2007, ABC News blog “The Blotter” incorrectly reported that as the movie ends, “a screen appears that states three-fourths of the drug enforcement agents assigned to New York were convicted as a result of Lucas cooperation.”  There were no such convictions, the Drug Enforcement Administration (DEA) says, and a group of former agents and the attorney who prosecuted the case are demanding a retraction.

Gregory Korniloff, the DEA case agent on Lucas’s case, told The Blotter, “After risking life and limb for two and a half years in this investigation we are portrayed as a gang of corrupt hoodlums.”