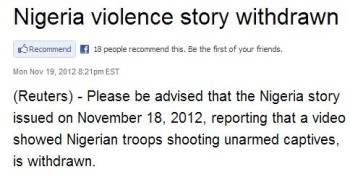 Reuters retracted a Nov. 18 story “reporting that a video showed Nigerian troops shooting unarmed captives,” according to a Nov. 19 statement on Reuters’ website.

The story, identified by Reuters as “STORY NUMBER: L5E8MI2UG,” was “withdrawn because questions have been raised about the date and location of the video,” the statement notes.

According to the Nigerian Tribune, the “Nigerian Army…denied the veracity of the video,” calling it propaganda.

iMediaEthics found the apparent article in question re-published on Nigerian news site This Day Live with a Reuters byline.  The article says the video came from “a soldier who said he was present while the shootings took place two weeks ago.”  Reuters notes that the “soldier, who requested anonymity, passed it to Reuters.”  See below a screenshot of the apparent article on This Day Live.

The report describes the video as “grainy” and noted Nigerian army spokesperson Colonel Mohammed Yerima suggesting the video was “staged” and the actions “impossible.”  For example, the video depicts, according to Reuters:

“A man sits down next to three or four corpses piled together on the roadside. He pleads for his life while soldiers shout at him and a crowd looks on a few meters away. ‘Please don’t fire,’ the man says in pidgin English.

“He tries to stand up and get onto the back of a pick up truck to the left. A Nigerian soldier shouts ‘come out’, and drags him off it, shoving him on the ground.

“One of them kicks him in the head. Then he and another soldier aim assault rifles at him. Four gunshots are heard and the man lies still next to the others.”

iMediaEthics has written to Reuters asking if it will put a note about the story’s original link to let readers know it has been “withdrawn,” if Reuters solicited the video from the unnamed soldier, how Reuters fact checked the video, if the This Day Live re-publication of Reuters’ story is exact, how Reuters informed sites that re-publish its content that the story was withdrawn, and whose “questions…about the date and location of the video” prompted the retraction. We’ll update with any response.

“We withdrew our content once we became aware of the questions raised about the video. We regret our error.”