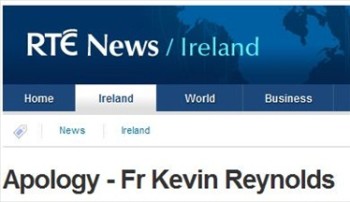 Irish public broadcaster RTE apologized to Father Kevin Reynolds of Galway, Ireland, after wrongly reporting accusations that the Catholic priest “fathered a child with an underage girl” in Africa, the Irish Independent reported.

“RTÉ acknowledges that the material in the programme concerning Fr. Reynolds ought never to have been broadcast.

“RTÉ now fully and unreservedly accepts that the allegations made by Prime Time against Fr. Kevin Reynolds are baseless, without any foundation whatever and untrue and that Fr. Reynolds is a priest of the utmost integrity who has had an unblemished 40 year career in the priesthood and who has made a valuable contribution to society in Kenya and Ireland both in education and in ministry.”

“RTÉ fully and unreservedly apologises to Fr. Kevin Reynolds for this defamation and deeply regrets the serious consequences suffered by him. He was entirely innocent of the allegations broadcast about him.”

According to the Irish Independent, Father Reynolds later took that  test, and proved his innocence.

Regardless, according to the apology:

“Prime Time duly broadcast the programme accusing Fr. Reynolds of raping a minor named Veneranda while he was a missionary in Kenya and fathering a child named Sheila as a result of this rape. He was also accused of secretly providing funds to Sheila.

“Both Veneranda and Sheila were interviewed in the programme to corroborate the allegations.

“As a result Fr. Kevin Reynolds was obliged to stand down from ministry and was removed as the parish priest of Ahascragh. He had to leave his home and his parish.

RTE’s story aired last May on its May 23 program Prime Time Investigations.

Father Reynolds has been reinstated, according to the Irish Independent.  The Belfast Telegraph reported that Bishop of Elphin, Bishop Christopher Jones, commented that his reaction to the program was “shock” and that Father Reynolds “has carried his cross with great dignity.  He willingly stepped aside from ministry and never expressed anger or impatience of any kind. I believe that his own deep faith and spirituality have been his greatest source of courage and consolation through this most dreadful experience of his life.”

iMediaEthics wrote to RTE for further comment about this story.  RTE’s Carolyn Fisher told iMediaethics by e-mail: “While this matter remains the subject of court proceedings, and therefore sub judice, RTÉ will not be making any further comment on it or in respect of it.”