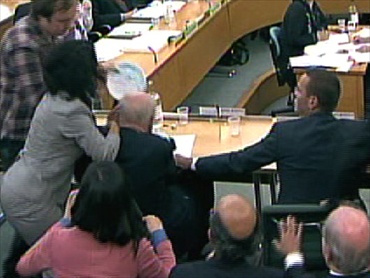 Rupert Murdoch told Parliament it is “the most humble day of my life.”  Later in the testimony, someone threw a pie of “shaving foam” at Murdoch.  According to the Guardian, the “assailant…apparently identified himself on Twitter shortly before the attack as a standup comic and UK Uncut activist called Jonnie Marbles.”  However, UK Uncut “moved swiftly to distance itself” from the action, the Guardian noted.

As Forbes reported, Rupert Murdoch “acknowledged, however, that he did not investigate after Brooks said the News of the World had paid police officers for information.”  He also noted that “we have broken our trust with our readers,” according to ABC News.

ABC News noted that Rupert Murdoch responded to “a number of questions” that he “did not recall exact details.”

According to ABC News, James Murdoch stated that “It’s a matter of real regret that the facts could not emerge and could not be gotten to, to my understanding, faster.”

To that, James Murdoch admitted “some fees have been paid” but that he was “surprised and shocked” about the payments.  Rupert Murdoch reportedly agreed to “stop paying these fees” to Mulcaire “as long as that is not in contravention of a contract.”

“Was the News of the World sacrificed to protect Rebekah Brooks? And do you regret that?”

Rupert Murdoch denied any connection beween “Brooks’s resignation and the closure of the News of the World.” He explained he “trusted” Brooks so he didn’t take her first resignation, but took the second one because “she insisted.”

James Murdoch announced the July 10 closure of News of the World a week before Brooks resigned from News International.  Many called for Brooks’ resignation earlier, including the family of Milly Dowler, the murdered teen whose phone News of the World reportedly hacked.

Rupert Murdoch told Parliament that he is “not really in touch” with his editors, explaining that he calls the Sunday Times’ editor weekly and used to call the News of the World editor occasionally once a week. Murdoch added that he is “most closely in touch with” the Wall Street Journal’s editor since “they work in the same building.”

Despite reports that News International may add a Sunday edition to its daily newspaper the Sun in place of the News of the World, James Murdoch reportedly told Parliament “there are no immediate plans to open a new Sunday tabloid — although ‘we leave all options open.'”

Rupert Murdoch did not “accept that, ultimately [he is] responsible for this whole fiasco” and instead put the blame on “the people he trusted, and the people they trusted.”  He said he shut News of the World down because the company “felt ashamed” and “had broken our trust with our readers.”

He commented that News Corp. has “seen no evidence” that any of his news properties hacked 9/11 victims’ phones.

As the Guardian noted, this past weekend, the Guardian’s Nick Davies offered “suggested lines of questioning” for the Murdochs and Rebekah Brooks. See here.

Rupert Murdoch brought a “prepared” statement for the hearing (See here) but didn’t get to read it at the hearing, according to Hollywood Reporter.  The statement read that it is “the most humble day of my career” and that he and James Murdoch have “great respect for all of you, for Parliament and for the people of Britain whom you represent.”

He ackonwledged he has “made my share of mistakes” in his 57-year career of running News Corp. and described his reaction to the Dowler hacking as “sickened” and “angry.”

He apologized to the phone hacking victims and stated that phone hacking and bribery are “wrong.”  (Note: In an editorial, the News Corp.-owned Wall Street Journal put the blame for the phone hacking scandal on the police for not investigating, an opinion that was widely ridiculed .  See iMediaEthics’ story about the criticism of that editorial here.)