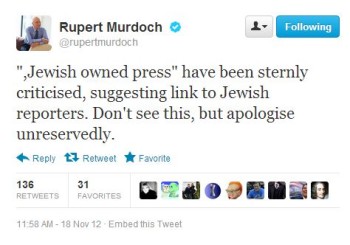 The Hollywood Reporter noted that the Daily Beast’s Peter Beinart called the tweet about the press being “Jewish owned” “downright dumb and offensive.”

The Hollywood Reporter and Global Post noted that Murdoch isn’t alone in being criticized for his tweeted comments about the Middle East. In Murdoch’s company is reality star Kim Kardashian, who apologized after tweeting that she was “praying for everyone in Israel.” Kardashian blogged that she deleted her tweets “about saying prayers for the people in Palestine and Israel…because I realized that some people were offended and hurt by what I said.”

iMediaEthics wrote earlier about the BBC’s apology to Rabbi Jonathan Sacks, the “Chief Rabbi of Britain,” for asking him about Gaza when he apparently didn’t know he was on-air during his “brief, uninterrupted interlude” for the “Thought for the Day” segment.

“They don’t get arrested for indecency on major LA highways! Or abandon love child’s (sic).”

Murdoch’s apology on Twitter to the actor, who is suing News Corp’s now-closed News of the World,  said:  “Hugh Grant states that he is deeply involved in his daughter’s life – I accept that, regret tweet on the matter. Apologies to both parents.”

iMediaEthics is writing to News Corp. asking for any response to the criticism of Murdoch’s apology and will update with any response.