Rupert Murdoch on News of the World's Max Mosley Story: 'Unacceptable' & 'I 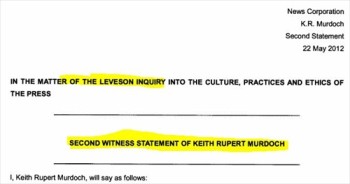 Mosley also took his case to the European Court of Human Rights, asking for a “prior notification” rule, but the court didn’t rule in Mosley’s favor.  In Mosley’s November 2011 testimony to the Leveson Inquiry, he claimed News of the World’s Neville Thurlbeck threatened one of the women involved in order to get information for the story and that Thurlbeck had a “rehearsal” to show the women how to get the footage the newspaper wanted.  News of the World‘s Colin Myler rejected Mosley’s “blackmail” claims, as we wrote.

When Murdoch testified at the inquiry in April, he argued the newspaper wasn’t blackmailing the women but “doing a favour for someone in returning for a favour.”  The Guardian noted that despite the courts’ ruling against the newspaper in this reporting, the newspaper’s editor, Colin Myler, said in 2009 “we are who we are and I make no apologies for publishing that story.”

The Leveson Inquiry posted on its website Murdoch’s “second witness statement,” from its July 9 “afternoon session.”  Murdoch’s statement was dated May 22 and notes that he previously spoke at the inquiry in April and “was asked about the Mosley litigation.”

“I make this second statement in response to this and to supplement my First Statement,” the statement reads.

Concerning the Mosley case, Murdoch said that upon review of Mosley’s case:

“I now understand why Justice Eady found that Neville Thurlbeck’s treatment of his potential source was unacceptable. As I tried to suggest in my testimony, journalists routinely negotiate with sources; the classic example is promising confidentiality. But under the circumstances that were before Justice Eady, I understand and of course accept the court’s judgment that Mr. Thurlbeck’s conduct in that case was inappropriate.”

Murdoch added that he doesn’t “believe that this sort of behaviour has been widespread at News International.”

With regards to Mosley’s March 2011 letter to the company calling for “an investigation into” the reporting of the story,  Murdoch indicated that the company didn’t respond immediately because it slipped through the cracks.  Murdoch said the letter was directed to Rebekah Brooks who “was consumed with the emerging facts about phone-hacking,” and  then months later the company found the letter and “sent [Mosley] an apology and undertook to provide him with a substantive response.”
See his statement here.