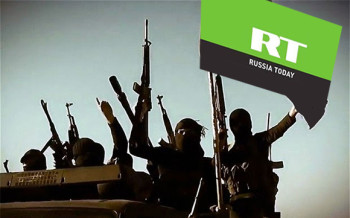 The new chair of the Broadcasting Board of Governors, Andrew Lack, grouped them in a recent interview with the New York Times. But the Times failed to challenge Lack’s claim or seek a rebuttal from Russia Today before publication. The BBG is an “independent federal agency responsible for all U.S. government and government sponsored, non military, international broadcasting.”

Lack said, “We are facing a number of challenges from entities like Russia Today which is out there pushing a point of view, the Islamic State in the Middle East and groups like Boko Haram.”
iMediaEthics sees two apparent methodological fails with the Times reporting:
1. Russia Today was not contacted and given an opportunity for rebuttal before publication. The Times‘ policy clearly states:
“Rebuttals. Few writers need to be reminded that we seek and publish a response from anyone criticized in our pages. But when the criticism is serious, we have a special obligation to describe the scope of the accusation and let the subject respond in detail. No subject should be taken by surprise when the paper appears, or feel that there was no chance to respond.”
2. The New York Times did not challenge Lack’s comment grouping the two terrorist groups with RT. Without holding him accountable to provide any evidence to back up such a criticism, the Times simply repeated Lack’s comment.
In a press release sent to iMediaEthics yesterday, RT’s editor-in-chief Margarita Simonyan said:
“We are extremely outraged that the new head of the BBG mentions RT in the same breath as world’s number one terrorist army. We see this as an international scandal and demand an explanation.”
Anna Belkina, the head of communications for RT, told iMediaEthics by e-mail today: “We were not aware of the comments before they were published and the New York Times did not contact RT for a comment. We have since reached out to the New York Times and the BBG with request for an explanation, but have not yet heard back.”
RT says on its website it has a “global reach of over 700 million people in 100+ countries.” It identifies itself as:
“RT news covers the major issues of our time for viewers wishing to question more and delivers stories often missed by the mainstream media to create news with an edge. RT provides an alternative perspective on major global events, and acquaints an international audience with the Russian viewpoint.”
iMediaEthics has written to the Times head of communications Eileen Murphy and reporter Ron Nixon and BBG for more information. We’ll update with any more information.
The U.S. Society of Professional Journalists ethics committee member Fred Brown told Russian news outlet Sputnik, “I have no way to evaluate the thought processes of Mr. [Andrew] Lack or the Board of Governors. I don’t want to make uniformed assumptions about motivations or possible agendas. Of course, Mr. Lack and the board shouldn’t be doing that, either, in their assessment about RT.”
He added, “Alternative coverage is part of free speech…It should be accepted and, as long as it is not doing anything unprincipled, respected.”
“It appears as though he was saying that the ‘threat’ is that other organizations, including these three, have been very effective at telling their stories, giving their version of events. He seems to be saying the United States needs to improve its story-telling as well,” Brown further commented.
UPDATE: Jan.25, 2015, 6:53PM:  Fixed typo (Boko Haram)