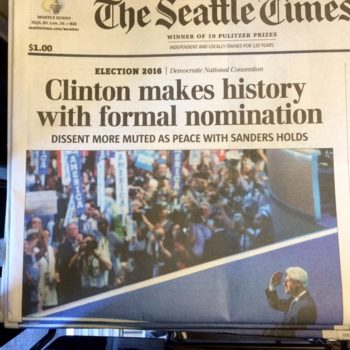 The Seattle Times apologized to readers for putting a photo of former president Bill Clinton on its front page last week when reporting on the official Democratic nomination of Hillary Clinton for president.

Leon Espinoza, the Times‘ assistant managing editor for standards and engagement, told iMediaEthics by e-mail “in the light of day, we quickly realized we blew it.” The newspaper heard from dozens of readers via phone, e-mail and social media upset with the photo choice.

“Even in this digital age, many Seattle Times readers were looking for a keepsake front page, one they could hold up, save and savor as tangible evidence something remarkable had happened for the first time in their lifetimes, many of them told us,” he told iMediaEthics. “Visually, we missed the moment. We didn’t want to defend, deny or dismiss. Instead, because it was the right thing to do, we quickly took responsibility in social media (saying we missed the mark and should have shown Hillary Clinton), held a staff meeting to talk about what went wrong and how we could better serve readers going forward, and crafted a front-page note acknowledging our mistake.”

According to Espinoza, the newspaper heard back from some readers who said they were satisfied with the apology and the later DNC coverage from the newspaper. “We didn’t alleviate the disappointment of our initial mistake,” he told iMediaEthics. “But we demonstrated what we believe: Nothing is more important than our relationship with the readers we serve in print, online and in social media.”

That apology, signed by Espinoza, read

“Wednesday’s front page, which featured a banner headline,’Clinton makes history with formal nomination,’ failed to include a photograph of Hillary Clinton, the first woman to lead a major-party ticket, instead putting the visual focus on former President Bill Clinton, who made an impassioned case for her election as the next president. The omission upset many readers. In hindsight, we focused too much on the live moment and not enough on the history being made. We apologize for missing the mark.”

Hillary Clinton, first woman to win the presidency! Let's put a big pic of her husband on the front page! pic.twitter.com/hRzu9VxuSE

Hillary Clinton makes history, but pics of her husband and former rival make the front page of the papers? #Fox35 pic.twitter.com/aufb9a1Np2

“Other publications that published front page photographs of Bill Clinton, as opposed to Hillary Clinton, include The Washington Post, The Houston Chronicle, The Chicago Tribune and The Wall Street Journal,” to CBS News. “Newspapers such as The New York Times and USA Today selected either a picture of Hillary supporters or a picture of the candidate’s live video feed being broadcasted on the Wells Fargo Arena big screen.”

The Washington Post explained “Hillary Clinton was not actually physically present onstage — though she did appear via live video, very late in the evening. But a live video screen doesn’t make for a great photo opportunity. And Bill Clinton’s speech was clearly the big moment of the night.”

The Los Angeles Times reported some readers “detected a whiff of sexism,” so in response the newspaper published a selection of their complaint letters.