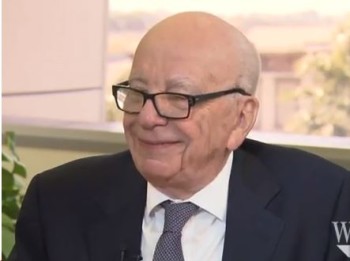 News Corp. CEO Rupert Murdoch commented in a secret recording that “every newspaper in Fleet Street” England pays cops and that the police investigation into phone hacking is “incompetent.”

Exaro News is credited with first publishing the tape, which was recorded in March at the Sun newspaper. Its editor-in-chief Mark Watts is quoted by the Guardian as saying that the site won’t “betray confidential sources” by naming who provided the tape but that it will publish “everything that we have.”

According to the tape transcript, which Exaro News noted was partially “redacted … for legal reasons,” Murdoch claimed that News Corp’s UK branch, News UK, was being “picked on” for doing what everyone else in the British press was doing.

Murdoch is quoted as saying:

“I think it’s just outrageous, but – and I don’t know of anybody, or anything, that did anything that wasn’t being done across Fleet Street and wasn’t the culture. And we’re being picked on…There was a sort of – we got caught with dirty hands, I guess, with the News of the World, and everybody piled on.”

Murdoch went on to seemingly defend the practice of swapping cash for stories with the police and even put the blame on the police. Journalists have been paying “for news tips from cops…a hundred years, absolutely,” Murdoch claimed, further adding that the payments were probably “made at the instigation of cops.”

He also told staff present at the meeting that he’d “give you total support, even if you’re convicted and get six months or whatever” and that if he isn’t going to be around, his son Lachlan or News Corp CEO Robert Thomson are in charge.  But, in response to a question about how Murdoch knew things would be fine, he said “it’s nothing much more than a hunch.”

Murdoch also offered more information about News Corp’s Management and Standards Committee, which was created following the closure of News of the World amidst growing accusations of phone hacking. News Corp’s website said that the committee is to “take responsibility for all matters in relation to phone hacking at the News of the World, payments to the police and all other related issues at News International.”  The committee, as iMediaEthics has written before, has been turning over information to police to investigate and many journalists have been arrested because of that information.

In the tape, Murdoch said that the committee hasn’t turned over any information to the police “for months” and that lawyer Kathleen Harris, whose website lists her as the committee’s “lead Criminal adviser,” “told [the committee] to stop” giving information.

He added that “it was a mistake, I think,” for the committee to give information to the police about the Sun.

Murdoch called for staff to “protect sources,” and then said that a News of the World source who had been “paid a bundle, a huge bundle of money” for a story said she was hacked because “some idiot at the News of the World…hacked it just to check,” putting that story in jeopardy.

Murdoch to Appear in front of Parliament again

Because of those remarks in the tape, the UK Parliament wants Murdoch back to explain his comments, the BBC’s Breaking News account tweeted July 9.

And, the assistant commissioner for the UK Metropolitan police, Cressida Dick, told Parliament that the police are trying to get “the tape of the meeting” to “assess the full contents” of his comments, the Guardian reported.

A statement from News Corp to the Guardian suggested Murdoch would be willing to appear in Parliament. “Mr Murdoch welcomes the opportunity to return to the select committee and answer their questions. He looks forward to clearing up any misconceptions as soon as possible,” the statement reads.