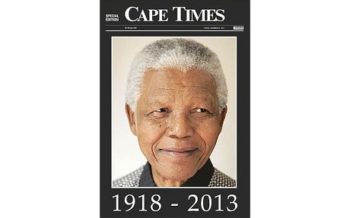 Alide Dasnois, an editor for the Cape Times (South Africa) was fired in late 2013, after she did not put the news of Nelson Mandela’s death on the front page of the newspaper. Instead, the news of Mandela’s death was “contained within a four-page wrap-around tribute,” South Africa’s Business Day Live reported, as had been planned well in advance.

Now, long after her dismissal, several newspapers published by the Cape Times’s parent company must apologize for their stories about her firing and her settlement with the company.

The media advocacy group Right 2 Know told iMediaEthics, “We’ve stuck by Alide since the beginning, realising that she was clearly being hounded out of the job because she got on the wrong side of management. We’ve supported in an advocacy role and even protested on the streets in defence of her.” Further, Right 2 Know added that Dasnois’s firing “was a clear case of management interfering in editorial and a violation of editorial independence.”

After she was jettisoned in June 2014, Dasnois, who is white, sued the Cape Times and its owner, Independent Media, claiming “her dismissal was discriminatory” and that she was wrongly accused of being “a racist,” “immoral,” and having “disrespected” Mandela and anyone who “mourned him.”

Tony Weaver, a former Cape Times staffer, noted in an op-ed published in the newspaper at the time (and republished recently in the Daily Maverick), that the Cape Times had set up a plan “months ago for exactly this scenario” — Mandela’s death running up against newspaper print deadline. That scenario was for the Cape Times to “produce a ‘wrap-around,’ a broadsheet double page that literally wraps around the newspaper.”

The Cape Times‘ front-page article after Mandela’s death focused instead on a ruling against the then-Agriculture, Forestry and Fisheries minister for giving a contract to a subsidiary of the company that also controls the newspaper.

Just before the trial over the firing, Independent Media offered Dasnois a settlement which included a “joint public statement.” In the settlement agreement, Independent Media said it didn’t think Dasnois was racist and that her “decision not to put Mandela’s death on the front page” wasn’t a move made in “disrespect” but rather an editorial call.

But Independent Media also issued a statement with a misleading headline: “Independent vindicated as Dasnois settles over Mandela coverage.” The Cape Times published the statement “almost in verbatim form” with a “staff reporter byline,” on its front page, the council said, and other Independent outlets covered it.

Dasnois complained to the South African Press Ombudsman Johan Retief about the coverage of her settlement. “A number of hurtful and untrue allegations which had been made against me and about which I had litigated in the first place are then repeated as if they were the truth,” she said, the ombudsman ruled.

As a result, the ombudsman has ruled that several South African newspapers have to apologize to Dasnois over articles about her lawsuit settlement.

Open Democracy Advice Centre told iMediaEthics in part, “ODAC welcomes this decision, as well as the direction that the Cape Times, the Diamond Fields Advertiser and The Star must apologise to Dasnois for omitting to state in their coverage of the settlement that the agreement entailed that Independent Newspapers withdrew all allegations of racism against Dasnois, that she never intended to show disrespect for Mandela, and that her editorial independence was not in dispute; and publish the agreement between the parties in full.”

In the ruling, Dasnois also said using Independent Media’s use of the word “vindicated” was wrong because it was not cleared, and instead made concessions to her. Dasnois’s lawyers told Independent Media to retract its statement but more Independent papers published it.

Dasnois wanted the Cape Times to apologize and retract its articles about her.

Retief, the ombudsman, found that the Cape Times‘s coverage was fine because the information that it reported that didn’t come from the Independent Media agreement with Dasnois was opinion and not presented as fact. “Of course Dasnois will not agree that everything in these articles is correct (such as that she had attempted to conclude the matter in return for a substantial financial payout) – but again, that is a matter of perspective, and the newspaper had the right to hold its own view on this matter (and on others).”

However, Retief said that Cape Times sister publications the Argus, Daily News, Diamond Fields Advertiser and the Star broke the guidelines by not including certain information. “I am satisfied that the content published by the sister newspapers was also justified,” noted Retief. “However, it was what some of them did not publish that was creating a problem.”

The Cape Argus, Daily News, Diamond Fields Advertiser and Star were wrong “not because of inaccuracies in their reporting, but because the central elements of the joint agreement had been omitted (with special reference to allegations of racism and disrespect for Mandela).”  Those four publications were “unfair to Dasnois,” Retief concluded.

The Cape Times‘ headline was “problematic” because it said Independent Media was “vindicated,” Retief said. “At the very least, the headline should have indicated that this was an interpretation – as it stands, an interpretation was presented as fact,” he said. As such, Retief ruled against the Cape Times for its headline.

Cape Times has to apologize to Dasnois for its headline. The Times, the Diamond Fields Advertiser and the Star have to apologize for not including in their reports Independent Media said Dasnois wasn’t racist or disrespecting Mandela and had editorial independence, and also has to publish the full joint agreement.

Press Ombudsman orders Cape Times to apologise to me https://t.co/QLCA8jZPrk

The press council ruling is here.