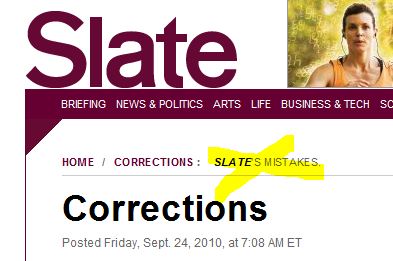 Politico was called out for lack of transparency.

In his July 20 article, Singer-Vine wrote that he created computer programs to track changes on Politico’s articles.  He reported that roughly 3 percent of 400 articles over three weeks had been changed – but readers weren’t notified.

But, Politico turned around on Slate’s article and noted that Slate’s own correction policy would have permitted many of the changes Slate criticized Politico for making.

Politico also spotted several errors in the Slate critique. Singer-Vine’s story now features many corrections, posted before and after his story, as well as on a separate sidebar page.

Silverman detailed Sept 24 an interview with Slate editor David Plotz, in which Plotz described the critique of Slate’s Politico critique as “embarrassing” and in which Plotz assumed the blame for the mistake.

The errors were made “because of a mistake by me, which was not to really realize and then not to notice or call attention to the fact that we were tweaking them for things we were doing ourselves,” Plotz is quoted as saying.

At issue was the 24-hour window in which Slate’s corrections policy allowed it to make corrections or changes to stories without notifying readers —  if someone at Slate spotted the error.

Plotz told SIlverman that Slate “shut” the window for all content on the site except the Slatest, an aggregation feature.

The Slatest will still change content without posting a correction “if the errors are spotted within sixty minutes of publication…. because of the way the content is produced.”  But, “that the window will close when The Slatest undergoes some changes, which should be soon,” Silverman reported.

The new policy goes into effect Sept. 21, Plotz wrote in an e-mail to StinkyJournalism.

“The policy is posted at the end of our weekly corrections roundup, which has a standing hompage link. It’s pretty simple: Slate strives to correct all errors of fact. If you’ve seen an error in our pages, let us know at corrections@slate.com.”

Besides shutting the 24-hour window, Plotz explained that “We are standardizing the way we label stories that we have updated. These are stories where we are NOT making a correction, but are adding new reporting or thinking to it. We are attempting to give those updates a regular format, but are still working out the kinks in that. But again, these are NOT corrections.”

iMediaEthics has written to Politico’s John Harris for more information and will update with any response.