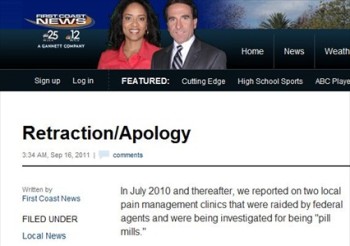 Jacksonville, Florida TV station First Coast News apologized Sept. 16 for inaccurately labeling a man named George H.G. Hall in its stories about “two local pain management clinics that were raided by federal agents and were being investigated for being ‘pill mills.'”

First Coast News, which is owned by Gannett,  had stated that Hall “ran the clinics and is the brother of one of the clinic doctors.”  However, Hall, “a retired executive and now college professor and practicing lawyer,” isn’t related to or involved in the clinics, according to the correction.

According to the correction and retraction, “These errors resulted from First Coast News’ mistakes in reporting.” iMediaEthics is writing to First Coast News to learn more about how the error occurred.