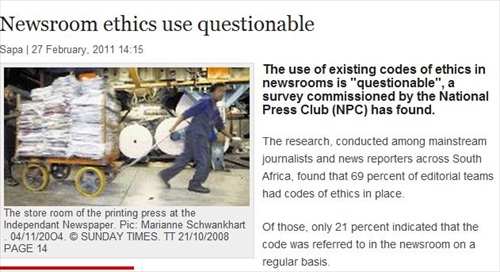 According to the survey of South African journalists, conducted in Nov. 2010, “69% of editorial teams had codes of ethics in place,” but just 21% of that group reported that the ethics code “was referred to in the newsroom on a regular basis.”

iMediaEthics wrote to the Press Club for more information about the survey. Riana Sinden of Consulta Research, which carried the survey out for the press club, responded, explaining that the survey was the result of “discussions at the National Press Club EXCO about the proposed Media Tribunal and legislative changes.”

There, “various working journalists said that ethical arguments are good and well, but their working conditions were not conducive to the high standards of journalism that were being discussed. The reality of their situation did not correspond with the ideals being put forward, even by their own editors.”

Other interesting information from the survey includes:

iMediaEthics asked David Moore, our resident polling expert and PollSkeptics columnist, about the survey’s methods.  Moore noted that the Press Club was careful in characterizing its survey results, which reflect the views of the respondents, but do not necessarily represent the South African journalism community overall.

The journalists were from mainstream media, according to Sinden, and Consulta Research invited journalists from both members and non-members of the press club, “as some additional distribution lists of major media groups in SA were combined; the research specifically focused on news reporters and news journalists opposed to trade/specialist media per se. These news reporters represented print, broadcast and online fields.”

The survey “highlighted work environment areas that are perceived to be both conducive and non-conducive to ethical journalism by mainstream journalists and reporters,” Consulta Research’s Adre Schreuder is quoted by Times Live as saying.

“The survey placed strong emphasis on ethical areas as the aim of the research was to establish where and how ethical standards, practices and behaviours, seen from a journalist’s perspective, should be strengthened and supported, especially in the newsroom where both editor and journalist face immense pressure to turn out critical news stories of the day,” Schreuder is quoted as saying in a statement.