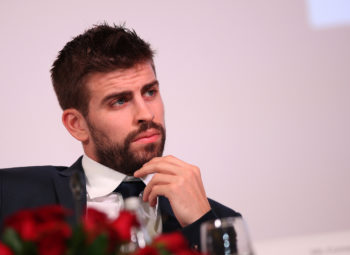 The Spanish daily sports newspaper AS apologized after suggesting soccer player Gerard Pique cut the Spain’s colors off his jersey’s sleeves during a recent game.

“AS, among other prominent media outlets, ran a story — which it later removed — stating as fact that the Barcelona defender had cut his sleeves while questioning if there were anti-Spanish sentiments behind the move,” ESPN reported.

In an Oct. 10 opinion piece (here’s the English language version), AS‘ Alfredo Relano apologized for the newspaper’s article saying that he had cut his sleeves because of his previous comments about Catalan identity. According to Relano, the director of AS, the AS article only claimed so for about 20 minutes before it was removed.

Relano said that Pique has “been mistakenly maligned” because of his criticism toward Real Madrid but acknowledged that he had “always been exemplary” as a player.

“Speaking specifically on the matter, Piqué has previously sought to separate the two issues, in a move which is welcome. Though some of his attacks on Real have seemed excessive to me, anything that’s based on purely footballing rivalry is at the end of the day harmless and can be understood. The conflict over Catalan identity, which we’ve struggled to deal with for a while, is another issue – and he’s never gone there. Piqué has always been a model Spain player, like so many others from his club. Barcelona have contributed more men to the team throughout its history than any other side, it should not be forgotten.

“And now this misinterpreted incident over his cut-away sleeves has tipped him over the edge; the straw that broke the camel’s back. Others before him have announced their intention not to be considered for La Roja duty after a long international career; that’s nothing new. But he’d be the first to do it over the ‘Catalan conflict’, and it’d be a dismal chapter in a historic period. So I hope he changes his mind, and I offer him our apologies for the hastiness with which, for 20 minutes, this newspaper’s online version initially reported on the storm whipped up on social media, that impenetrable hubbub from which very little good ever emerges.”

In fact, Pique and player Sergio Ramos of Real Madrid cut their sleeves off for comfort and didn’t actually cut off Spanish colors, the Royal Spanish Football Federation said, according to ESPN. In an Oct. 9 press release on its website, the federation said it stood with Pique. The federation said:

“On the contrary to what some malicious comments where the Spanish player was accused of cutting the sleeves of the jersey to avoid wearing the band with the national colours. In this regard, the RFEF wishes to explain that said band on the Adidas jersey only exists in the short sleeve version, and not on the long sleeve, which is the one Piqué used in the match. The absence of the bands can be seen on the intact version of the jersey worn by teammate Sergio Ramos, who did use the long sleeve. “

ESPN noted that this isn’t the first time Pique has been accused of anti-Spanish sentiment. “Prior to Sunday’s controversy, Pique was accused of deliberately putting up his middle finger during the Spanish national anthem at Euro 2016, while he has regularly been jeered by Spain fans due to what some see as his anti-Real Madrid and pro-Catalan independence views.”