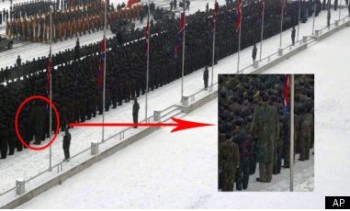 See a cropped close-up of the image in question. (Credit: AP via Huffington Post)

We wrote in December about the Photoshopped image from Korean Central News Agency of Kim Jong-il’s funeral, in which a group of people were apparently erased from the image for no stated reason.

According to the Atlantic Wire, a Reddit user spotted an interesting detail in another picture from the funeral. By zooming in and looking at a line of people at the funeral procession, one can spot what appears to be an exceptionally tall man in comparison with the rest of the crowd.

The Atlantic Wire noted that “the photo comes straight from the Associated Press” so it didn’t appear to be a Korean Central News Agency alteration. (As we wrote, the agency released another Photoshopped image in July 2011 of a flood.)

However, the Daily Mail and the New York Daily News said that the photo was from KCNA.

The man in question would “clear 8-and-a-half feet,” according to Atlantic Wire’s estimation.