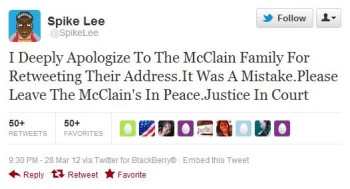 Lee mistakenly tweeted the address of Florida couple Elaine and David McClain, instead of Zimmerman’s.  As CNN explained, “The McClains have a son whose middle name is George and whose last name is Zimmerman, but he has no connection with the controversy.”

ABC News added that the son “hasn’t lived at the residence since 1995.”

The McClains received “hate mail” and uninvited visitors to their home and ended up staying in a hotel because of the tweet, according to CNN.  The Smoking Gun noted that the McClains learned of the online publication of their address because “a TV reporter arrived at their home asking for ‘George.'”

E! Online added “the McClains were bombarded by inquiries from reporters, hate mail and threats from would-be vigilantes that forced them to leave their Orlando residence for a hotel.”  Elaine McClain called the incident “very scary” in an interview with CNN.

MSNBC argued that the “great big ‘WRONG!’ here isn’t the bad address, or whether Lee should research the info before he retweets” but rather that “celebrities have no business using their position of power and popularity on Twitter to incite a mob.”

We have written to Spike Lee’s company for comment and will update with any response.

We wrote late last month when it was revealed that news outlets including the Houston Chronicle, CNN, and US Weekly published tweets about Trayvon Martin from an account purporting to be actor Will Ferrell’s.  However, the account was a hoax.

The Houston Chronicle has since published a correction that reads: “A tweet believed to have been written by Will Ferrell in support of a bogus anti-racism charity set up to reportedly honor slain teenager Trayvon Martin has been exposed as a fake.”

Other media apologies in the Trayvon Martin case recently include Fox News’s Geraldo Rivera’s lukewarm mea culpa for his comments that “the hoodie is as much responsible for Trayvon Martin’s death as George Zimmerman was” and NBC News’ April 3 apology for selectively editing the transcript of Zimmerman’s 911 call.