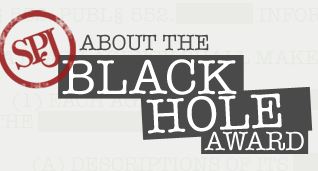 The Society of Professional Journalists created an award to “dis-honor” Utah’s legislature and governor.  The award is called the “Black Hole Award” and was given to Utah for its HB477 law, which goes into effect July 1.  The law, among other things, will make it harder and more expensive to get public records.

“This is by far the most anti-democratic secrecy legislation we have ever seen in recent history,” SPJ Freedom of Information Committee Chairman David Cuillier is quoted as saying. “This isn’t about protecting privacy of citizens or saving tax dollars. This is about hiding shady dealings to protect the privacy of officials so they can fool the public without recourse.”

There were also five runners up to the award.