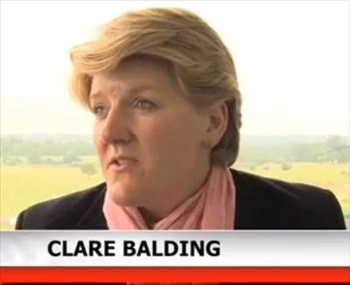 Clare Balding, pictured above in a screenshot from a YouTube video, recently had her complaint against The Times on Sunday's AA Gill upheld. Gill labeled her a "dyke on a bike." (Credit: YOuTube, "Racingpostdotcom")

The British Press Complaints Commission ruled in favor of a lesbian sports presenter and journalist after a newspaper columnist labeled her “a dyke on a bike,” the BBC reported.

The PCC is an independent British watchdog organization “which deals with complaints about the editorial content of newspapers and magazines (and their websites),” its website explains.

The sports journalist Clare Balding filed a complaint in July about Sunday Times columnist AA Gill, who penned the review of her new TV show “Britain by Bike.” (Because The Times’ website went behind a paywall this summer, we cannot access the content of Gill’s review of “Britain by Bike.”)

The Sunday Times defended Gill’s work for the following reasons, according to the PCC’s ruling.

However, the PCC decided the phrase was ‘in a demeaning and gratuitous way” and that it violated Clause 12 of its “editor’s code of practice,” which instructs:

Further, the PCC ordered the Times to publish its full verdict in the newspaper.  The full adjudication was published Sept 19, PCC communications director Jonathan Collett told iMediaEthics via e-mail.

Collett wrote to iMediaEthics that “The PCC’s greatest sanction is issuing a critical adjudication against a newspaper or magazine. This is a very strong deterrent which effectively acts as a powerful ‘name and shame’ sanction as editors do not like having to publicise their mistakes to their staff, readers and competitors. Under the system of self regulation the publication will then have to publish this text in full on its own pages, with a headline reference to the PCC, and with ‘due prominence’.”

In response to the ruling, Balding is quoted as saying “It was important for me and, crucially, for millions of other people quietly going about their work, to make the point that we deserve to be judged on our ability to do our jobs and not on the basis of our race, religion, gender or, in this case, sexual orientation.”

“I hope that this decision shows we are moving on from the days when derogatory comments about a person’s sexuality were regarded as clever or funny,” Balding is reported to have said in a statement.

The Guardian reported that Balding complained to the newspaper’s editor John Witherow but in response was told “In my view some members of the gay community need to stop regarding themselves as having a special victim status and behave like any other sensible group that is accepted by society. Not having a privileged status means, of course, one must accept occasionally being the butt of jokes. A person’s sexuality should not give them a protected status.”

Further, Witherow is quoted as saying that Gill’s comments weren’t “particularly cruel, especially as he ended by so warmly endorsing you as a presenter.”

Balding replied to Witherow that “I am happy to be described as a lesbian, as and when relevant, but ‘dyke’ is too often used as a pejorative and insulting term,” The Guardian reported.

The Associated Press added that “the newspaper said Gill was a ‘controversialist who pursues the English tradition of lampooning and ridiculing public figures’. It pointed out he had been the subject of 62 PCC complaints in the last five years which had not been upheld.”

iMediaEthics has written to Balding and will update with any response.

UPDATE: 10/15/2010 7:09 PM EST:  Clare Balding wrote to StinkyJournalism via e-mail and verified the e-mail exchange with John Witherow.  She also wrote the following response to our other questions:

“The Sunday Times has not formally (or in any other way) apologised but I live in hope of a hand written letter and a bunch of flowers.  I am an eternal optimist.  I love the fact that A.A. Gill might have been using ‘dyke’ as an empowering term, just love it.  But believe it?  No.  I don’t.  I do not believe in dragging a child by his ears into a room to apologise and as such, have rather left it now.”